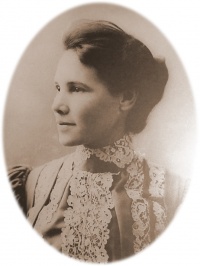 Nannie Cox Jackson was born in 1864 and educated in public schools in Charlottesville and Washington, D.C. She retired in 1939 after having taught in the Albemarle and Charlottesville school systems for many years. In 1969, Jackson-Via Elementary School, the city's first building built as a desegregated school, was named for both Black educator, Jackson, and a white educator, Betty Davis Via.[1]

Intelligent and dynamic, Jackson motivated and demanded the best from all students. She was a tireless worker who constantly planned newer and better programs to meet the needs of the times.

Jackson started a class in which students, both boys and girls, learned to cook and sew. She started the first hot lunch program in the city schools, contributing money from her own pocket. She served hot soup and biscuits for just a few pennies. While the students ate, she talked with them about being the best they could be. Jackson gave the athletic program a boost by organizing the first football team in the Charlottesville schools. She fed the team and the coaches after each game using cafeteria money and some of her own.

She was an outstanding community leader and devoted her life to service for her family and community. She fed the hungry and was found wherever families were in distress. She obtained many scholarships so that students could go to college and followed up with words of encouragement -- 'believe in yourself; you can do it.'

Jackson died in 1953 at the age of 88. The Charlottesville School Board honored Mrs. Jackson by naming Jackson-Via Elementary School for her and Betty Davis Via."[2]