ICLEI - Local Governments for Sustainability is an international organization in which membership includes more than 1200 cities, towns, and counties, to commit to the environmental sustainability. 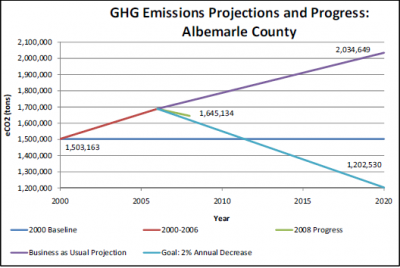 Albemarle joined the organization shortly after adopting the Cool Counties initiative in December 2007 to committ to a goal of reducing carbon emissions by 80 percent by 2050, or an average annual reductions of 2 percent.

There has been some opposition to ICLEI membership in Albemarle County. In March 2011, Jefferson Area Tea Party held a forum to review local sustainability initiatives raising concerns about this as a goal of regional planning. As of May 2011, Supervisor Ken Boyd has called for the county to drop its membership in the international organization.

On June 8, 2011, the Albemarle County Board of Supervisors voted 4-2 to withdraw from ICLEI. During a public comment period prior to the vote, 83 individuals addressed the board, largely on the topic of whether or not the County should continue membership in ICLEI, and whether or not to accept a regional planning grant. Supervisors Boyd and Snow, who would vote to withdraw, expressed concern that ICLEI sought to dictate, control, and/or monitor citizens' behaviors, to include their energy usage. Supervisors Mallek and Rooker, who would vote to continue ICLEI membership, indicated that the membership provided County staff with software and expertise that would assist in estimating greenhouse gas emissions in the County. Supervisors Snow, Thomas, Boyd, and Dorrier voted in favor of a motion to direct the County Executive to withdraw from ICLEI; supervisors Mallek and Rooker voted in oppositon to the motion.[1] [2] [3]