Difference between revisions of "Greene County" 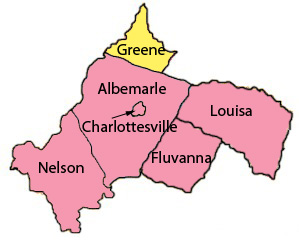 Greene County is governed by a five-member Board of Supervisors. Prior to the mid-1980's, there were only three members. [1]

The three fire departments that cover Greene are all volunteer departments. The rescue squad is a hybrid of volunteers and University of Virginia personnel. [3]

The general election was held on November 5, 2019.

A Special Election was held on Tuesday, November 5, 2019 for the purpose of filling the remaining term of office of the Greene Clerk of Circuit Court. [4] Acting clerk Susan Birckhead defeated Steve Keene for the position 2,203 votes to 2,024 votes.

Larry Vernon Snow was re-elected as Commissioner of Revenue despite being indicted on federal identity theft charges. [6]

The first administrator was Ethyle Giuseppe. [7]

County administrator John Barkley stepped down in the summer of 2018. The Board of Supervisors named Brenda G. Garton as the interim administrator on July 10, 2018. [8]

Greene County is a member of the Thomas Jefferson Planning District.

Planning to increase the municipal water supply operated by the Rapidan Service Authority continues in the fall of 2018. The Greene County Board of Supervisors held a work session on September 18, 2018 to hear more details of a plan that would involved the construction of a new dam to create a reservoir. The project could cost between $45 million and $65 million. [11]

According to the permit issued by the U.S. Army Corps of Engineers allows for the inundation of 15,891 linear feet of White Run and several tributaries of the Rapidan River. The project is located north of Dairy Road and east of Watson Road near the town of Stanardsville. The county has until September 12, 2022 to complete the project according to the permit. The full volume of the reservoir will be 900 million gallons with a surface area of 125 acres. [12]