Difference between revisions of "Friendship Court" 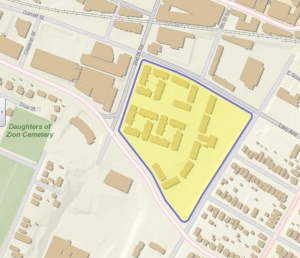 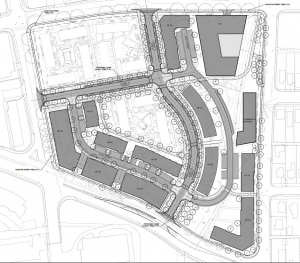 Redevelopment of Phase 1 is expected to break ground in the fall of 2020, delayed from spring due to the COVID-19 Emergency. [3]

In 2019, Piedmont Housing will become the managing partner for the community, and will have decision-making authority with regard to property management, services, and the business affairs of the partnership, and will have the opportunity to acquire the property.[5]

Phase 1 will consist of three buildings that will create 106 units constructed on the existing open space at the community. The buildings will be broken out as outlined below: [6]

A draft plan was released on June 16, 2016. [7] However the project is under review and is changing as Piedmont Housing gets closer to taking the property over in November 2018. [8] [9]

The Piedmont Housing Alliance is expected to redevelop the nearly 12 acre site and has been working towards these efforts for year. In March 2016 they announced they had received a $100,000 grant from the Jessie Ball DuPont Foundation. [10] City government gave PHA a $350,000 for the effort. [11]

An informational video on the redevelopment project by PHA released January 2017[13]:

The architectural firm Grimm and Parker was hired in March 2017 to implement the plan. [14] As part of the plan, PHA is proposing amenities such as an early childhood program and a daycare. [15]

Since 2005, the company has paid a donation to the Charlottesville Police Department in exchange for additional patrols in and around the community. Under the terms of this "sponsorship agreement", police officers looking for over-time can participate in this shift. In FY2011, the amount is $88,522[16]