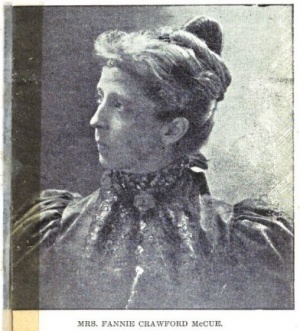 Her husband, a successful attorney, three time Mayor of Charlottesville and known womanizer, was found guilty of her murder. He was hanged for her murder on February 10, 1905. The story of the murder and jury trial of her husband was covered extensively in the the local daily newspaper. The trail verdict was published the New York Times..[1]

The McCue Murder: Complete Story of the Crime and the Famous Trial of the Ex-mayor (1904), published by reporters James H. Lindsay and John S. Patton shortly after the case reached its conclusion, can be found online at http://vc.lib.harvard.edu/vc/deliver/~scarlet/004043067.

Interment was at Riverview Cemetery.