Crozet is an unincorporated town located in western Albemarle County and one of the county's designated growth areas. 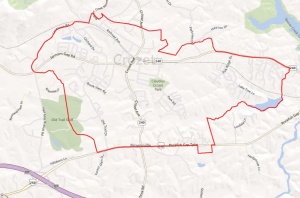 Crozet is located on the I-64 corridor approximately 12 miles west of Charlottesville and 21 miles east of Staunton. It is contiguous with a designated growth area of the same name, and is in the White Hall Magisterial District. Crozet encompasses approximately 2,883 acres or 4.5 square miles[1]. The development area is almost entirely within the Lickinghole Creek watershed, one reason why the boundaries are drawn the way they are[1].

As of March 2010, Crozet had 2,192 dwellings[4]. The development area is almost entirely within the Lickinghole Creek watershed, one reason why the boundaries are drawn the way they are[1] with another 2,834 approved and ready to be constructed. Many people who live in Crozet commute to Charlottesville, making it somewhat of a bedroom community[4].

Founded as "Wayland's Crossing" the town grew around a rail stop established on Waylands farm in 1876.[5] Crozet was renamed in 1870 in honor of Colonel Claudius Crozet, the French-born civil engineer who directed the construction of the Blue Ridge Tunnel. The community's economic base was largely agricultural in its early history, leading to the founding of food processing facilities.

In 1922, a group of Crozet residents organized a pledge to restrict drivers to slow speeds through the recently paved roads. [6]

In March 1962, members of the Crozet Lions Club asked the Board of Supervisors for more police protection due to a series of robberies. [8]

Crozet was first designated as a designated growth area with the 1971 revision of the county's comprehensive plan[1].

Crozet gets municipal water from the Beaver Creek Reservoir, which is maintained by the Rivanna Water and Sewer Authority[4]. Water is treated at the Crozet Water Treatment Plant which is permitted and capable of producing 1 million gallons of water a day (MGD). The RWSA is required to begin planning as soon as the plant reaches 80% of capacity. Currently, water demand in Crozet averages .4 MGD.

Wastewater is transported to the Moores Creek Wastewater Treatment Plant via the Crozet Interceptor.

Construction had been delayed due to a lack of funding, prompting the formation of a campaign to push the Board of Supervisors to make it a priority. [10]

The county is currently constructing a $1.2 million stormwater management system for Crozet that is designed in part to encourage development downtown. [11] Construction will be completed in May 2012.

The private schools Field School and the Miller School are located in Crozet.

Albemarle County considers Crozet a "community", which means it expects growth to be more urban in character[1]. The designated growth area is guided by the Crozet Master Plan. First adopted in 2004, the a revised plan was adopted in 2010.

Several online and print publications exist that are exclusively focused on Crozet: