Difference between revisions of "Civil War"

Some buildings in Scottsville were used by the Confederacy as hospitals[2].

Citizens of the area were likely to join the Confederate 19th Virginia Infantry Regiment, which fought as part of the Army of Northern Virginia, originally named the Confederate Army of the Potomac.[1][3]

A mill owned by the Marchant family was destroyed in 1865 by Union forces. The Charlottesville Manufacturing Company had been manufacturing uniforms for Confederate soliders[1].

The University of Virginia was rare in the fact that they remained open and in operation throughout the war, although the buildings were used for military-related purposes. Approximately 4,000 of the University’s 8,000 pre-1865 alumni fought for the Confederacy. An unknown number of University students fought for the Union; Charles Augustus Briggs of New York and Bernard Farrar, Jr., of Missouri are among the very few documented examples.[5]

April 17, 1861: The Virginia Convention voted to secede from the Union. The delegates passed the Ordinance of Secession with 88 “yea” and 55 “no” votes. Albemarle delegates were split: University of Virginia law professor James P. Holcombe voted for secession while prominent local lawyer Valentine Wood Southall voted against it.[5]

May 23, 1861: The secession decision was ratified by a vote of the state’s white male population. Virginia joins the Confederacy and Richmond becomes the capital. Among the "yea" votes were both aforementioned Albemarle delegates, Thomas Jefferson’s grandson George Wythe Randolph, and former U.S. president John Tyler; future Confederate general Jubal Early continued his opposition to secession.[5]

1862—1864: Approximately 940 enslaved African Americans are impressed into labor by Confederate authorities in Charlottesville and Albemarle County.Free blacks between the ages of fifteen and fifty were required to report to the courthouse, where they were examined by a doctor from the Charlottesville General Hospital who determined how and where they should work. If they did not report, they were taken by gunpoint. Against the protestations of their owners, slaves were taken, too. Between 1862 and 1864, about 940 slaves were impressed. It is unknown how many free Black people were impressed.[1]

Union troops approached Charlottesville in early 1865, arriving on the morning of March 3. Many white Charlottesvillians were convinced that the troops would burn the University of Virginia, which was treating Confederate soldiers in their hospital for battlefield wounds and illnesses.[9][4] During the course of the Civil War, about 22,500 wounded Confederate soldiers and a few captured Union soldiers were tended to at the University-run 500-bed Charlottesville General Hospital. The superintendent was professor and doctor J.L. Cabell.[1]

The major target was the iron railroad bridge that carried the Virginia Central Railroad over the Rivanna River, was destroyed. About a dozen warehouses storing foodstuff and military supplies were burned, along with Woolen Mills.[1][4] A mill owned by the Marchant family, which had been producing Confederate uniforms, was destroyed. Some homes in Charlottesville were ransacked, but not torched. Houses outside the city limits were generally fared worse. Monticello, a tourist destination for Union troops during occupation, was unharmed.[1][4] 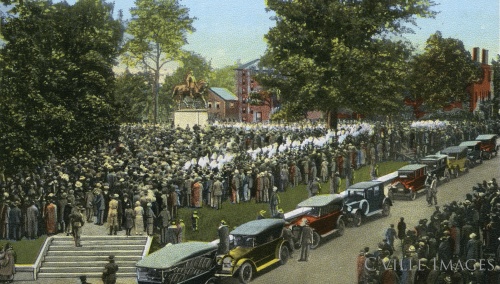 Paul Goodloe McIntire assembled several parcels of land, knocked down existing buildings, and then deeded the land as Market Street Park to the city in 1917 for the specific purpose of erecting the statue of Confederate General Robert E. Lee; he donated the completed statue seven years later in 1924.[11] The reveal of the statue was celebrated with a reunion of confederate soldiers, a parade, and a speech by University of Virginia President, Edwin A. Alderman. [12]

McIntire also purchased the land that was once McKee Row, next to the Circuit Courthouse.[13] He deeded this land as Court Square Park to the city on the specific condition that a sculpture representing Confederate General Jackson would be displayed there.[14][15] McIntire's deed requires that the land "will never be used other than for a park and that no other monument except Jackson’s would ever occupy it.”[14] In June 2021, Charlottesville City Council voted to remove both of the statues.[16]

In 1909, a mass-produced bronze statue of a Confederate soldier leaning on musket was posted in Court Square facing south; titled “At Ready.” The plaque featured inscriptions about valor. The sculptor is unknown.[17] Flanked by two bronze smoothbore 12-pounder Napoleons, and cannonballs. The statue was unveiled on May 5, 1909, the anniversary of the 1857 creation of the Monticello Guard,[18] a militia company in Charlottesville that formed in front of the Albemarle County Courthouse when Virginia seceded from the union in 1861, and became part of the 19th Virginia Infantry. The statue and nearby cannon, and cannonballs were removed to be placed on display at the Third Winchester Battlefield,[17] part of the Shenandoah Valley Battlefields National Historic District.[19] On August 6, 2020, the Albemarle County Board of Supervisors voted unanimously to remove the statue.[20]

On June 7, 1893, a monument of a Confederate soldier was unveiled in the University of Virginia's Confederate Cemetery. The statue is an effigy of bareheaded soldier standing on pedestal holding musket with fixed bayonet. There are bronze tablets naming 1,097 Civil War dead, most of whom died of wounds or illness in Charlottesville hospitals and are buried in the cemetery. Engraved in the stone base of the statue are the words "Fate denied them victory but crowned them with glorious immortality." There have been calls from students and local residents in recent years for the statue's removal. Ine July 2020, access to the cemetery was limited in an attempt to stem protests.[21]

In 1866, a group of Charlottesville women, most of whom had cared for sick and wounded soldiers during the war, started the Ladies Confederate Memorial Association. They copied from hospital registers the names, states, companies and regiments of those who had died. The women transferred the information onto rough wood markers that were placed at the head of each grave. They also collected $1,500, used to build a stone wall around the Confederate Cemetery at UVA.[22]

The John Bowie Strange Camp of the United Confederate Veterans (UCV) was a local Civil War veterans' organization. The organization was named in honor of Confederate soldier Lieutenant Colonel John Bowie Strange (VMI 1842). Co-founded in 1889 by R. T. W. Duke, Sr., this camp "was only the fourteenth of its kind in any Southern state and symbolized the depth of Confederate feeling in the community."[23] The UCV itself was organized in 1889, and held its last reunion in 1951.

After the Civil War, each side generated a veterans program. The Confederates had the United Confederate Veterans (UCV), the Union counterpart was the Grand Army of the Republic (GAR). The local chapter of the UCV was supported by local businessmen and the Albemarle Chapter of the United Daughters of the Confederacy.