Difference between revisions of "City Council" 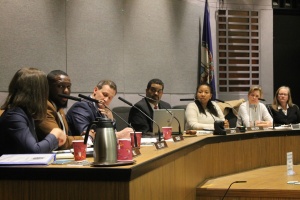 The Charlottesville City Council is a five-member elected body that serves as City's legislative and governing body. Each member is elected at-large and serves a four-year term.

The overall direction of Charlottesville local government is provided through the City Council Vision.

Council chooses one of its own to serve as Mayor, and another to serve as Vice Mayor. Both are two-year terms. Nikuyah Walker was elected as mayor in January 2018, and Heather Hill became vice mayor. [2]

The Mayor presides over meetings, calls special meetings, makes some appointments to advisory boards and serves as the ceremonial head of government. The Vice Mayor substitutes whenever the Mayor is unavailable.

Traditionally, regular meetings of City Council begin at 7:00 PM in City Council Chambers. They begin with the pledge of allegiance, followed by any awards, recognitions or announcements that need to be made. Then, Council will invite the public up to speak during for up to three minutes on any item that is not on the agenda. Depending on who has been Mayor, this period either last until everyone had their chance to speak or until 7:35 PM. Up until February 2016, councilors had the opportunity to respond to comments. New rules made then prevented them from doing so and made others changes. Mayor Mike Signer. At the beginning of 2018, they expressed interest in changing rules for meetings. [3]

Next, the Council will consider the consent agenda, which is a list of resolutions and ordinances that Council has agreed in advance to approve. Beginning in 2003, Council moved this section to the front of the agenda[4] rather than at the conclusion of the meeting. Any item pulled from the agenda, however, will be deferred until after all regular items have been heard.

At the February 2016 retreat, a majority of Councilors agreed to make changes to the way meetings were to be conducted. They included a stricter adherence to Robert's Rules of Order, moving work sessions to the second Monday meeting of each month, imposing time limits on discussions, and limiting City Councilor comments to three minutes. [10] However, the biggest controversy centered around a decision to use a lottery system to choose speakers at Council's first public period. [11] Council voted 4-1 on February 16, 2016 to enact the new changes with Bob Fenwick voting no. [12] The new procedures went into effect beginning with the March 7 meeting. [13]

The current configuration of a 5-member City Council has been in place since the 1920's according to City Attorney Craig Brown. Before then there were 12 alderman and a Mayor. [14] Other attempts have been made to change the system.

In 1960, State senator Edward O. McCue Jr. introduced a bill that would change the city charter to require a ward system with four districts and one at-large. Citizens would still elect all of the councilors, but those elected by wards must be residents of that district. The move was not popular with the city council at the time. [15] Delegate Harold M. Burrows filed another bill that would require the mayor to be elected by the public. That bill was also panned by City Councilors because they had not been consulted. [16] The issue came up during the Democratic Primary for City Council. Candidates and sitting councilors protested and said any charter change should itself require a referendum. [17]

The NAACP proposed switching to a system with four wards and three at-large representatives and the idea went to a non-binding advisory referendum on November 3, 1981. The measure was approved by six out of the eight wards but soon after, members of Council began to seek a second referendum. Sherman White of the NAACP as well as others questioned the need for a second referendum. Many were concerned that night that the item was not included on the sample ballot distributed by the Charlottesville Democratic Party. Councilor John Conover suggested that a two-thirds majority in favor of the change should be required and called for a second referendum. [18]

A majority of Councilors felt the results of the first referendum were inconclusive and so they voted on March 1, 1982 to hold a second one. [19]

In 2004, an Election Task Force was appointed to study changing council elections to November from May. Councilor Rob Schilling had wanted to try to expand the scope to also include expansion to a ward system, but was voted down 4-1. [21] Schilling said a system of four members elected by ward and 3 elected at-large would be representative of the city.

The first two Councilors to be elected in November were Holly Edwards and Satyendra Huja.

The UVA Student Council selects one person to serve as liaison to the City Council, a practice that began in 2004. However, the position has been vacant since the first appointee graduated. Maeve Curtain was appointed to the position in January 2015. [22]

At times, Council has been asked to weigh in on issues that are outside of their scope. For instance, a public hearing opposing the Patriot Act was held on July 21, 2003. [23]