Zoning is a land-use regulatory mechanism that determines what can be done with property. This article is intended to be a compendium of zoning history in both Albemarle County and Charlottesville. 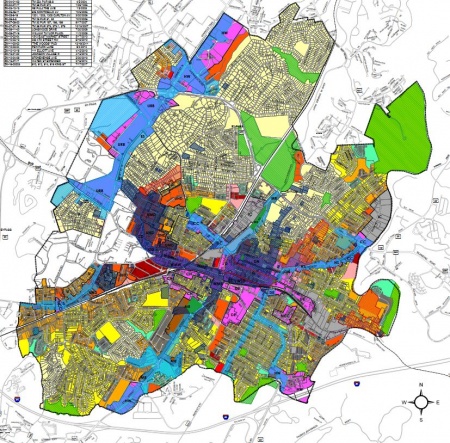 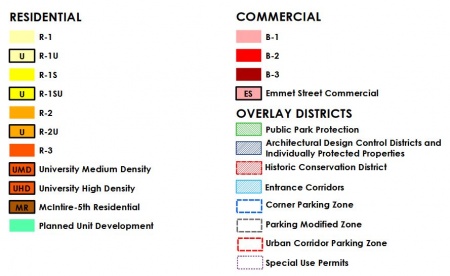 The first significant case regarding the relatively new practice of zoning, Village of Euclid v. Ambler Realty Co. (1926), opened the floodgates for use-based zoning in the United States.

The first zoning enabling legislation for Virginia was adopted in 1922 and gradually expanded in scope and coverage until the present framework was adopted in 1962. These basic statutes continue to change in greater or lesser measure with almost every session of the General Assembly. [2]

The Virginia General Assembly has identified the manner in which a locality may exercise its zoning power with great specificity in a number of statutes, including the following:

The Origins of the Zoning Power

In 1762 Charlottesville was founded by an Act of the Assembly as the Albemarle County seat. Charlottesville was established as a gridded town plan from the start. Dr. Thomas Walker was assigned by the County as Trustee, and a two acre public square was set aside for the courthouse at the northern edge of the fifty acre town. The site for the courthouse was selected on a hillside directly above the gridded village, several blocks above Three Notch'd Road or the main street of town. Over time, business activities around the Court Square included taverns, tailors, milliners, a printing shop, a gunsmith, and a jeweler. A portion of the original courthouse (1803) still stands as a part of the current complex of structures. The original twenty-eight block grid corresponds to the following existing streets: Sixth and McIntire on the east and west respectively, Jefferson and South on the north and south. A plan from 1818 indicated east/west streets as 66 feet in width, while north/south streets as 33 feet wide; this plan also indicated a two block by seven block annexation added directly to the north of the original grid.[6]

In 1854, the city held its first mayoral election. The mayor-city council form of town government continued until 1888, when Charlottesville was incorporated. At this time, a ring of land surrounding the original grid was annexed to create a city of 781 acres. Throughout the early 1800's, business activity and urban development slowly began to shift from Court Square down to the Three Notch'd Road, now called Main Street. As James Alexander indicates in his Recollections from 1874, "Main Street as It Was in 1828 and as It Is at This Time. - This street, when we first knew it, had few houses, and only two or three business places on it, now it has from one end to the other, fine houses and substantial business stores; then it was rough, and in winter season with mud enough to stall wagons passing over it; now it is macadamized and is well graded; then there were only patches of paved sidewalks, now there are wide sidewalks laid with brick or slate its entire length."

Several distinct residential settlements emerged both within the original city grid and around its periphery. Park Street to the north and Ridge Street to the south included houses of prominent merchants and businessmen from the city. The westernmost section of downtown called Vinegar Hill and later Random Row, emerged as a business and residential center largely occupied by portions of the town's black population. Other significant nineteenth century neighborhoods included Belmont, Star Hill, and Fifeville.

After the Civil War land use patterns around Charlottesville began to change. Without access to slave labor, once-wealthy landowners could no longer afford to cultivate large tracts of land. At the same time, Charlottesville was outgrowing its boundaries and began promoting the growth of local industry. Newly established real-estate development companies divided up farmland for industrial usage. By 1890, most of the estates in Albemarle County that ringed Charlottesville no longer belonged to individual farmers. City council refused to annex land unless the conditions of the streets and drainage improvements had been approved by the City Street Committee and sub-division plans were submitted. In turn, developers adapted to the changes in the bureaucratic approval process as well as changes in finance, real estate, and building technology. Developers began to consolidate their development process. Larger Developers, such as the Belmont Land Company, a corporation named after the 551-acre Belle Mont estate that had been owned by a man named Slaughter Ficklin and the Charlottesville Industrial and Land Improvement Company which owned all but 50-60 acres of the Rose Hill estate land owned by John H. Craven, a farm manager for Thomas Jefferson's Tufton property, bought large estates, subdivided them, laid out the roads, alleys and underground drainage utilities, built houses, set-up building and loan associations and marketed their new neighborhoods. (Source: The City as a Park: A Citizen's Guide to Charlottesville Parks. Prepared by Gregg Bleam Landscape Architects. Historian Aaron Wunsch.) 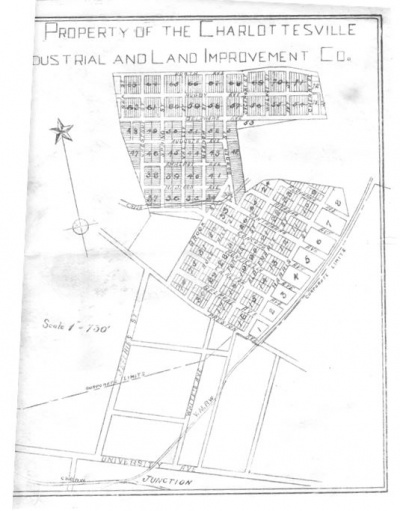 In 1916, Charlottesville more than tripled its size with the annexation of the land surrounding the city. By the 1950's the Rose Hill neighborhood had developed into a mixture of working-class housing, small family-owned businesses, boarding houses and several large manufacturing companies built to be served by the rail spurs. As with Preston Avenue, black-owned businesses continued to grown along Rose Hill Drive and Forrest Street (later renamed Forest Street). After WWII, homes were built on parcels which had been designated for commercial/industrial use. Business growth and neighborhood employment opportunities declined with the closing of manufacturing companies, such as the Essex Corp. fountain pens and pencils company, by the 1970's.

The first zoning code was initiated in ]]June 17]], 1929 and written by Allen Saville of Richmond, VA. The author argued for single family zoning but after community protest, the initial zoning code had two family residential as the lowest density option. [7] At this time, zoning restricted businesses from encroaching on white residential areas, but not black ones.[8] Within a few years, the black neighborhoods of Kellytown and Tinsleytown (now known as Rose Hill) were disrupted by new industries, such as Monticello Dairy, City Laundry, and the Triangle Service Station on Preston Ave.

How 1920s-era zoning laws separated people from what they love about cities. Planning By Christina Sturdivant Sani (Fellow) October 4, 2018 [9] 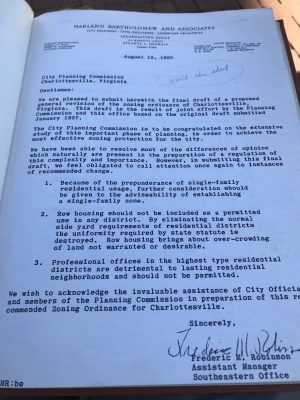 At their June 9, 1964 meeting, the City Planning Commission proposed an amendment to the zoning code to delete two-family dwellings from the R-1 zone to single-family home and other uses such as schools, churches and parks, that were then allowed. [11]

City Council decided to discourage construction of any types of housing besides single-family homes in the white and relatively wealthy neighborhoods of Fry's Spring, Johnson Village, Lewis Mountain, Venable, Barracks-Rugby, and Greenbrier.[8] That year, the city instituted a new R-1A single-family zone. This affected 4,500 parcels of land in the City, lots that had previously been too small for R-1 single-family designation, a process referred to as "downzoning." Proponents of downzoning intended to protect neighborhood stability and encourage homeownership. Opponents said that single-family zoning is exclusionary and would make housing less affordable. The change essentially prohibited multifamily apartment buildings in those neighborhoods.

In Belmont, one homeowner on Hinton Avenue had converted a single family house to add an independent apartment. The city ordered this to be an illegal action. [12]

On January 22, Council voted 3-2 to deny a resolution to require a notice to all city property owners whose land would be affected by the new zoning map. [13]

Council next discussed the matter on April 15.

City Attorney Clyde Gouldman told Council that there were three major revisions in the zoning amendment. These were the addition of the new R-1A zone to limit density in single family neighborhood, new bulk and height regulations, and a rewriting of the historic preservation section to designate individual properties.

Councilor Kay Slaughter supported the apartments if the home was owner-occupied and that could help with homeownership. Councilor Tom Vandever expressed doubt and said that might not protect neighborhoods near the University of Virginia. Councilor David Toscano said he would support the R-1A designation but he had reservations. Councilor Alvin Edwards also supported R-1A. [14]

Before their discussion that evening, Eugene Williams of the Dogwood Housing Limited Partnership said Council had not done enough to educate people about the plan, which he said would lead to perpetuation of housing discrimination in Charlottesville.

Opponents of the zoning included University of Virginia students who were concerned about the impact restricting rentals would have on prices, property owners who felt their rights were being taken away. [15]

At their meeting on May 20, 1991, Council discussed the matter again again and approved a motion allowing accessory apartments in structures of at least a 1,600 square feet as long as the owner lived there and there were two off-street parking spaces provided. They held first reading of the zoning map on this date. [16]

Council adopted the ordinance on second reading on June 3, 1991. Toscano expressed concern that three recent proposals to build affordable housing were met with opposition from neighbors. [17]

In 2003, the City of Charlottesville rewrote its zoning ordinance:

On March 21, 2016 the zoning for West Main Street was revised by City Council, splitting it into East/West districts rather than North/South and lowering allowed heights.[39] The change followed recommendations made by Rhodeside & Harwell in the West Main Streetscape study.

The ongoing legal audit of the zoning code continued. CADRE submitted a 16 page letter that commented on the work Robertson had undertaken. [40]

In 2017, the city considered form-based code in the Strategic Investment Area. [41] Form-based code is a type of zoning ordinance that focuses more on a building’s style and size, and less on its use.

"Among the innovations championed by the New Urbanist or neo-traditional movement, and by many other architects and planners, are "form-based" zoning codes. The primary goal of form-based codes is to guide the configuration and architectural quality of urban and suburban environments. That contrasts with conventional zoning, which often concentrates on the use of buildings, such as whether a block is residential or commercial." [42] By Roger K. Lewis, The Washington Post, July 24, 2004.

Department of Neighborhood Development Services (NDS) Director Alex Ikefuna referred to the zoning ordinance as a "wastebasket of errors.”[43] Ikefuna was making a point that if NDS is to improve its efficiency, the city must update its zoning ordinance.

In a sign of things to come, in the December 2018 the Minneapolis City Council passed 2040, a comprehensive plan to permit three-family homes in the city’s residential neighborhoods, abolish parking minimums for all new construction, and allow high-density buildings along transit corridors. Minnesota is a Home Rule state. https://slate.com/business/2018/12/minneapolis-single-family-zoning-housing-racism.html-->

Discussions regarding "upzoning" and "downzoning"