William Taylor Plaza is the planning name for a 100,000 square foot mixed-use project developed by Southern Development which would create up to fifty apartments or condominiums along Ridge Street and commercial space along Cherry Avenue. The development is named after colonial landowner William Taylor.

The first building at the site is a Fairfield Inn by Marriott. [1] 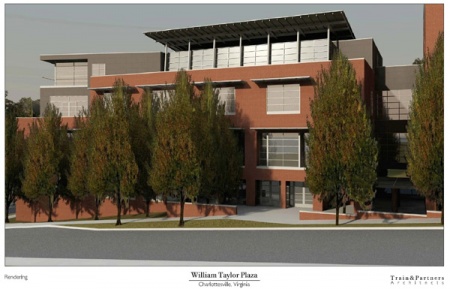 The conceptual plan by local architect Kirk Train shows two-story residential buildings along Ridge Street and commercial buildings up to five stories in height along Cherry Avenue. At least twenty percent of the land will be undisturbed and include a public arboretum.[3]

The architect for the 2009 concept plan is Kirk Train, Train & Partners Architects, who has won numerous awards for innovative design and historic preservation. Train & Partners has designed sustainable projects for clients including the University of Virginia, Virginia Commonwealth University's Rice Center - the first LEED Platinum certified project in Virginia, and Keswick Hall. [5] 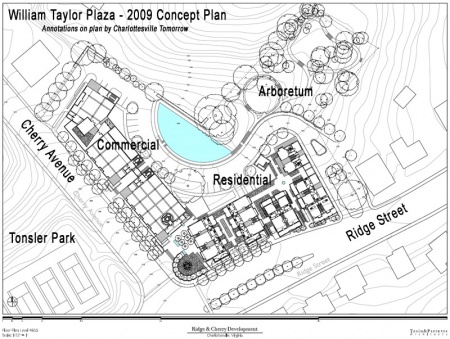 Southern Development acquired two parcels of land from the City of Charlottesville in October 2008 and added them to five lots they had previously purchased for a total of 2.9 acres.[6]

The Charlottesville Planning Commission recommended approval of the rezoning by a 5-2 vote on September 9, 2009. Following the Planning Commission recommendation, City Council rezoned the property to Planned Unit Development (PUD) at their Novermber 2, 2009 meeting. On November 18, 2009, the Charlottesville Board of Architectural Review approved the project's architectural design.

Residents have raised concerns that the proposed development may be on the site of the Allen Woodson Hawkins’ family graveyard,[7]. In February 2006, the Virginia Department of Historic Resources sent a letter to the United States Army Corps of Engineers pointing out that "the possibility remains that human burials are present within the project area, especially in the higher, flatter locations." [8] Archaeologist Lynn Rainville wrote a letter to City Council in October 2008 asking for a "formal sub-surface search" of a portion of the site before selling two city-owned parcels to Southern Development. [9] In January 2015, historian Cinder Stanton also wrote the city asking for an archaeological survey. [10]

Since the rezoning, Southern Development company entered into a partnership with Park Properties Management Company to finance the project. The concept changed to a rental-only project, and both firms petitioned the Planning Commission for an amendment to the PUD zoning to allow for an increase in dwelling units from 50 to 80. The commission voted 4-2 to recommend denial of this request at its meeting on February 8, 2011 out of concerns that the new plan was not supported by the neighborhood. [11] City Council voted 3-2 to deny the amendment to the PUD on February 22, 2011. [12]

Southern Development sought an amendment to the November 2009 rezoning that would reduce the structured-parking requirement from 90 percent to 60 percent to accomodate a Marriott-themed hotel. [13] The Planning Commission initially balked at the idea out of concerns that the hotel would not be a good use for the neighborhood. [14]

The Board of Architectural Review issued its final approval on December 15, 2015.

Planning work for the second phase got underway in July 2016 with a BAR work session with representatives of Management Services Corp who want to build an apartment complex on the site.[15] The BAR granted approval for massing in October 2016. [16]