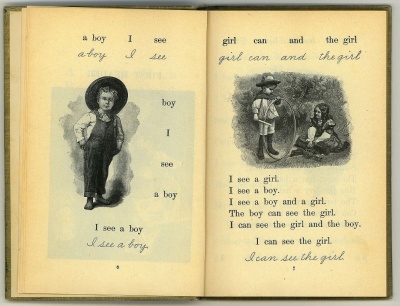 Born in Washington county, Pa., September 23, 1800, McGuffey is best known for writing the McGuffey Readers, the first widely used series of elementary school-level textbooks. McGuffey died May 4, 1873 at the University and is buried in the University of Virginia Cemetery.

The McGuffey Readers were a series of graded primers for primary grade levels. They were widely used as textbooks in American schools from the mid-19th century to the early 20th century, and are still used today in some private schools and homeschooling. The McGuffey Readers helped to standardize English language usage in the United States and not only reflected the moral values of the country in the 19th century but also shaped them. The editors of the Readers were brothers William Holmes McGuffey and Alexander Hamilton McGuffey. William created the first four readers and Alexander McGuffey created the fifth and sixth reader. About 120 million copies of McGuffey's Readers were sold between 1836 and 1960, placing its sales in a category with the Bible and Webster's Dictionary.

At the University of Virginia, a large ash tree in Pavilion IX garden, planted by professor George Tucker in 1826, was named for mid-century Pavilion resident William McGuffey because of the great care he took to protect and nurture the tree. The McGuffey Ash died in the late 1980s and its offspring was replanted in 1996. [1]