The West Main Streetscape is a now-cancelled multi-year plan intended to make West Main Street more welcoming to pedestrians and safer for bicycles. Other components had been adding including a new stormwater management system. [1]

The City of Charlottesville pursued multiple revenue sources for the project, which ballooned from a cost estimate original estimate of around $30 million in 2018 to likely over $50 million as of November 2020. [2]

The project was split into phases. The second phase had received funding through Smart Scale. A third spanning from Roosevelt Brown Boulevard to 8th Street NW had been recommended for funding. The University of Virginia had pledged $5 million toward the project.

However, City Council defunded the project in September 2021 and officially canceled it in June 2022. [3]

The city has paid nearly $3 million over multiple years to the firm Rhodeside & Harwell to create the plan. The work was intended to support additional growth on a corridor that experienced rapid transformation. Council approved a concept in March 2016 after much study. [4] They also readjusted the zoning on the street.

In October 2017, City Council agreed to split the project into phases and to pursue VDOT Revenue Sharing to help cover the $31 million cost. The city has allocated $10 million from its Capital Improvement Program for the project. [1]

History of the plan 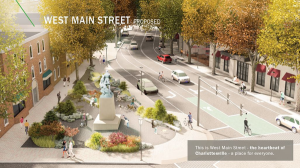 In November 2012, the PLACE Design Task Force was asked to weigh in on the project given that construction of the Marriott Residence Inn at 301 West Main was expected to begin in 2013, and that other student housing complexes +were planned including the Flats at West Village. [5]

As the study continued throughout the summer of 2014, representatives of churches such as First Baptist Church wanted their need for on-street parking to be considered. [7] The process was slightly slowed down to make sure all stakeholders were heard.

The plan did not have the support of a majority of City Council as was revealed when Mayor Satyendra Huja stated in January 2015 that he felt the plan was incoherent. [8]

Council approved the plan in March 2016. The Board of Architectural Review was briefed on progress towards the schematic drawings on October 10, 2016. [9]

The preliminary cost estimate to implement the streetscape was originally around $30 million, but has since increased to at least $49 million as of November 2020 (Phase 3 Right-of-way has not ).

Council has set aside $10 million for the project in the five-year capital improvement project and unsuccessfully applied for $18.3 million in funding through the second round of the Virginia Department of Transportation’s Smart Scale process. [10][11]

Rhodeside & Harwell hired multiple subcontractors to participate. By June 2018, the project was being managed by the Timmons Group under the supervision of Brian Copeland. Other contractors include Lincoln Surveying and Inframap Corp,

A subset of the study was to look at the zoning of the street. The recommendation was made to convert the street's two zoning into western and eastern districts as opposed to south and north districts enacted during the 2003 rezoning. [12]

There are approximately 90 on-street parking spaces on the road between JPA and Ridge-McIntire. [7] Dena Rhodeside identified the potential for as many as 4,000 new and existing parking spaces within 600 feet of West Main.