The West Main Streetcar was a proposed streetcar system in Charlottesville discussed in the early 21st century, beginning with a line along West Main Street connecting the Downtown Mall with the University of Virginia. The idea was studied by a Streetcar Task Force that presented a report to City Council in June of 2008. Council did not opt to proceed the matter further.

The Charlottesville City & Suburban Railway Company was sold at auction on November 10, 1903. [5]

The streetcar company eventually failed in 1935.[4] There were two primary reasons: a crippling embezzlement, and the absentee owner power company's managerial indifference to maintenance and upgrades, contributed to the increasingly dilapidated system's decline—but the main reason was 1930's loss of ridership to the greater convenience of cars.[6]

The Alliance for Community Choice in Transportation ("ACCT") commissioned the firm DJM+Harris Planning to assess Charlottesville’s transportation network in 2004. Engineer Roger Millar suggested a streetcar along West Main Street would support a dense zone of development between the City’s two thriving economic centers - the Corner district to the west, and the Downtown Mall to the east. West Main functions as the main connector between Charlottesville’s two social and financial hubs, but the DJM+Harris study proposed that the city ought to make the corridor a destination in and of itself.

Later in 2004, ACCT arranged a grant from the Blue Moon Fund to fly a group of local architects, developers, politicians, and city planners to Portland, Oregon for three days to check out that city's new streetcar system. The group also visited the streetcar system in Tacoma, Washington.[7]

Since that trip, several individuals have focused on potential streetcar implementation in this area, including designer Gary Okerlund and former mayor Maurice Cox, two members of the Streetcar Task Force. Okerlund Design Associates in particular has looked most closely at the design and what specific architecture is needed along a streetcar route. City Council officially commissioned a Charlottesville Streetcar Task Force in 2007. Council heard their report on June 16, 2008 and indicated they would support a further study if members of the business community would help pay for it. [1] 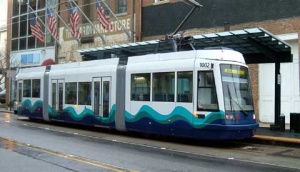 Evaluation of the West Main corridor revealed that it would likely be able to host a single streetcar track in the middle of the street. In the event of a streetcar stop, the track would split in two, with a stop creating a new median. This enables a potential streetcar to run on a predictable schedule without interruption from normal street traffic, with the additional benefit that riders getting on and off would only have to cross one lane of vehicular traffic.[citation needed] The streetcar envisioned for Charlottesville would not only have its own lane free of automobiles, it will be able to electronically change stop lights to ensure it stays on schedule.[7]

However, Collette Hall, then President of the North Downtown Association, voiced the concern that adding a lane for streetcars on Main Street could reduce the space for bike lanes and parking– two reasons her Association opposed the streetcar system. "And the third reason," said Hall, "is that one of our goals is underground utilities. We used to have so many big, beautiful trees in Charlottesville that have been cut back and killed to protect the wires. Now we have very narrow sidewalks with a lot of intruding utility poles. People want to be pedestrians and want underground wires, but we'll see more [streetcar] wires overhead and more ugliness reaching out to the side of the road."[7]

The Downtown Transit Center is the proposed initial streetcar stop in Phase 1, while 1.2 miles away it will terminate at the intersection of West Main and Jefferson Park Avenue. In between, streetcar planners hope to create a model of transit-oriented development, with stops every few blocks intended to promote economic development within close walking distance along the length of the corridor.

Okerlund told City Council he believed this first phase would cost around $23 million[1].

A later expansion could go through the Corner to the intersection of West Main, Ivy Road, and Emmet Street.

The final phase would travel Emmet to Barracks Road.

The Pro and Con on Streetcars

Okerlund said the streetcar will further encourage infill development along West Main Street by providing a reliable way to get around. According to Todd Gordon, his colleague and fellow task force member, a rail-based transit line generally has a "sphere of influence" where development can occur within a quarter mile of the tracks. "The biggest part of this is to convince people that a streetcar can do a lot more than just take people somewhere," Gordon. "The streetcar has an ability to attract the dense mixed-use development that I think Charlottesville shown a preference for, and a desire for. And that type of development doesn't spring up around a bus line." "We’re talking about spending a good deal of money, but because the streetcar has a development attraction to it, there’s a return on investment. The type of dense development that a streetcar can attract pays into the tax base, and can eventually pay for itself. [8]

Gordon says that's because bus routes can change, whereas rails in the ground indicate a community’s seriousness about transit. Okerlund says a firm cost-per-mile figure cannot be established until preliminary engineering is performed. That will take a more detailed analysis, similar to the one now authorized in Arlington County. But he says a streetcar in Charlottesville would have a capital cost between $10 and 15 million per mile. That figure would include the trams that would be operated, but not the annual operating budget.

One of the objectives of the Streetcar Task Force has been to identify a variety of sources of funding, including local government, federal dollars and private investments. A key challenge for the task force, and City Council, will be to demonstrate that, in a small town like Charlottesville, that the up front financial investment in a streetcar will pay dividends for the entire community down "the rails." Gordon acknowledges that the system will be very expensive to build, but that it could be worth it.

Developer Frank Stoner, who owns property along West Main, urged Council at their meeting on June 16, 2008 to fund a preliminary engineering study as a way to jump-start investment on the corridor. Stoner said he has property interests along the corridor. "If the City will take a leadership role in funding this, I think private funds will come along," Stoner said. "West Main Street is a fragile corridor. Progress has been made over the last 20 years, but it’s been intermittent, it’s been at a level that is far below expectations in terms of mixed-use, urban density, and I think a streetcar has demonstrated… to be a huge catalyst for private investment and development."

At the June 23, 2008 meeting of the MPO Policy Board, Councilor Satyendra Huja asked his colleagues in Albemarle County if they would support adding the project to the Transportation Improvement Program, a requirement for the project to receive federal funding.

Supervisor David Slutzky was skeptical, and said he would prefer to see the Regional Transit Authority be the region's large transit-oriented capital project included in the TIP[21].