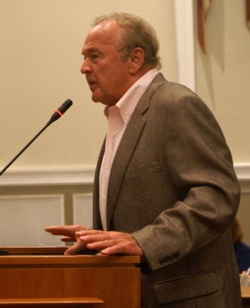 Wendell Wood is President and Chairman of United Land Corporation. He has been a land developer in Albemarle County since the early 1960s and has sold tracts of land for the development of Barracks Road Shopping Center, Fashion Square Mall, Hollymead Town Center, Wal-Mart and the U.S. Army's National Ground Intelligence Center, among other projects.[1]

In 2000, Wood ranked 65th in Virginia Business Magazine's "The Virginia 100", which ranks the one hundred wealthiest individuals in the Commonwealth. At that time he was estimated to have a net worth of approximately $160 million.[3]

At a City Council public hearing in October 1983, Wood spoke against $9.5 million in bonds for the Charlottesville Redevelopment and Housing Authority to pay a private developer for what would become the Omni Hotel. Wood was opposed to the use of public dollars, but added if they were used, a local developer should be doing the work. [4]

Wood has proposed a 1,902-home development called Somerset Farms along Route 20 south of Charlottesville. However, the development would be just outside the designated growth area.[5] The Albemarle Board of Supervisors last discussed the development in November 2012, when it split as to whether it should consider the proposal.[6]