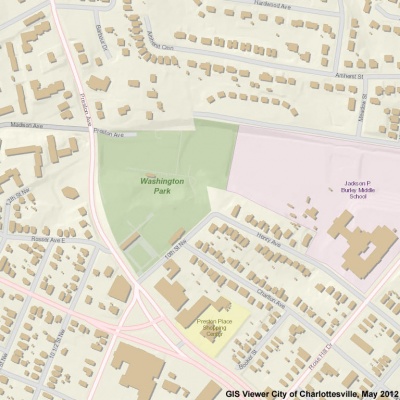 The park contains 9.25 acres, and a lighted outdoor pool with a wading area and bath house, three basketball courts (one lit), a recreation building with restrooms, and a playground area. A hill within the park drops to a level plain with a regulation softball field, basketball courts, a multi-use field, and picnic shelters.

The playground and picnic shelter were given to the city by the Dave Matthews Band. The drainage, seeding and grading for the third phase of the Washington Park renovations were funded by a generous grant by the Perry Foundation.

In 2010, Council agreed to spend $500K for maintenance at Washington Park pool. The pool was last renovated in the late 1990’s, according to parks director Brian Daly. The existing water slide has been deemed as unsafe.[2] The pool's bathhouse will be replaced in the fall of 2012 at a cost of $544,000. [3]

A wooden boardwalk, including a ramp for handicap access, have been added to make Washington Park's bog garden more accessible. Bog plants have survived remarkably well in spite of this season's drought. New plants have been added including both native and non-native bog plant varieties. Future plans include permanent plant labeling, educational brochure and bog garden walks to educate and involve the public in our unique micro-habitat.