Vinegar Hill (originally known as Random Row) was a historically black neighborhood that was razed in 1964 as part of a Charlottesville-led redevelopment program.[1] The neighborhood extended along Main Street from the eastern end of today's Downtown Mall.[2] 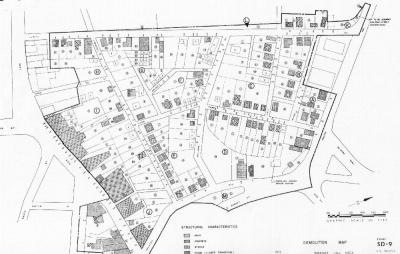 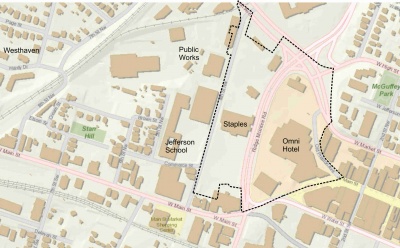 Another account states that one day a barrel of vinegar fell off of the back of a truck and left the neighborhood reeking for some time. Another story is that "vinegar" was a code for liquor.[4]

The neighborhood became the center of the African-American community by the mid 1920's and was the home of many black-owned businesses.[4]

In 1960, Charlottesville voters approved a referendum authorizing the redevelopment of Vinegar Hill. A poll tax prevented many of the neighborhood's residents from participating in the vote. In a 1960 survey conducted by the city, 29 businesses in the Vinegar Hill neighborhood were determined to have a combined gross income of $1.6 million.[5] The area was leveled in 1964. Many of the approximately 500 displaced residents moved into the Westhaven public housing project.[6]

Since the redevelopment was completed, it has been a point of contention in local race relations. A short documentary film chronicling the neighborhood's founding, development, and demise premiered at the Vinegar Hill Theater as part of the 2010 Virginia Film Festival. In the film, Kathy Harris, who grew up in the neighborhood, noted that after the destruction of Vinegar Hill her classmates and siblings "could not find employment here," and that "there are just no opportunities here for African American people."[7]

On November 7, 2011, Charlottesville City Council (2010-2011) approved a resolution apologizing for the redevelopment.[6]

On December 6, 2016, Charlottesville City Council (2016-2017) voted to allocate $15,000 for the establishment of a memorial plaza honoring Vinegar Hill at the western end of the Downtown Mall.[8] The only existing marker on the site identifying the area as a boundary of Vinegar Hill was long obscured by a trash can.[9]

The Vinegar Hill Monument Action Team of the Dialogue on Race is seeking to build a monument to the neighborhood on the grounds of the Jefferson School City Center and asked City Council in early 2012 for $24,000 from the Percent for Art fund to pay for its design.[10] Council only gave $18,000 to the design stage.[11] Construction is budgeted between $100,000 and $200,000. Three artists were in the running for the sculpture but Melvin Edwards of New York City was selected to create it.[12]