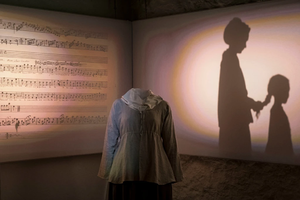 No portrait exists of Hemings, and descriptions wildly vary. As a result, curators at Monticello opted not to recreate a physical image of her. Photo by Gabriella Demczuk.[1]

Sarah "Sally" Hemings (1773-1835) is one of Monticello's most famous residents. Hemings was the daughter of an enslaved woman and the white man who enslaved her, John Wayles, father of Martha Wayles Jefferson.[2] She was enslaved by Thomas Jefferson and his daughter Maria Jefferson (later Eppes) until his death, and gave birth to at least six of his children. She raised four of them into adulthood. With the exception of two years in which the Jeffersons brought her to serve them in Paris (ages 14 to 16), she lived in Charlottesville until her death in 1835. She was never emancipated from slavery.[3][4]

Hemings died in Charlottesville, although her burial location remains unknown. She lived with her sons Madison and Eston as of the 1833 census, on an acre of land they owned off of what is today the intersection of the 9th/10th Street Connector (Roosevelt Brown Boulevard) and West Main Street. Emancipated enslaved people rarely held community-owned land that could have been used for a church or a graveyard and thus often buried their dead where they lived. Some historians, including Monticello historian Cinder Stanton, believe it is possible that Hemings is buried on that plot of land.[5]

Hemings has been portrayed in a wide variety of mediums and tones, generally centering on her relationship to Jefferson. Below are several local remembrances to her and reactions to her legacy:

The Carter G. Woodson Institute for African-American and African Studies at the University of Virginia discussed Hemings and her relationship to Jefferson in Query 2 of their podcast: Notes on the State.[6]

At Monticello, a daily 2-hour tour focusing on the Hemings family was established in 2018. Hemings is also featured in the "The Life of Sally Hemings" exhibit.[1][7]

Monticello's "Getting Word" Oral History Project has been able to find and link descendants and relations of Hemings. Between this genealogical and oral history work in the present and Madison Hemings' memoirs, the Hemings family is one of the most well-documented families of an enslaved person.

The Thomas Jefferson Heritage Society was formed in 2000 specifically to dispute the historical and scientific consensus that Jefferson fathered Hemings’s children.[8]