Catherine "Kitty" Foster (c. 1790–1863) was a free Black woman who owned property on the south side of what is now Jefferson Park Avenue.

Foster was born enslaved in Albemarle County. Because of this, her exact date of birth has not been remembered. She was born around 1790. Around 1816, she gave birth to a daughter, Sarah. In 1817 and 1820, respectively, she had two sons, German Evans and Burwell Evans. Her final child, a daughter named Ann Foster, was born in 1830.

By 1820, she was living in Albemarle County as a free Black woman. She rented a home in the free Black community of Canada, so named because it suggested both a freedom from American racism and a simultaneous "othering" by White residents of Charlottesville, including University of Virginia students. The name "Canada" suggested that the free Black individuals who lived there could never be really American.

In the 1830 federal census, she is listed as white, raising the possibility that she may have been light-skinned and possibly the daughter of a white man. No photographs, paintings, or descriptions of Foster's appearance are known.

In December 1833, Foster purchased just over two acres of land in Canada previously owned and leased out by the white merchant John Winn.

on October 6, 1857, when two of Foster’s grandchildren, twelve-year-old Susan Catharine Foster and nine-year-old Clayton R. Foster, applied to the Albemarle County Court for certification that they were neither free negroes nor mulattoes but rather what the General Assembly had described, in an 1833 law, as free persons of mixed blood. Thomas Jefferson Randolph, Thomas Jefferson‘s grandson and then a member of the university’s board of visitors, appeared in behalf of the children and the court agreed that they were “not negroes,” a distinction that allowed them to circumvent many of the restrictions on free African Americans. It did not, however, give them the full rights of white people.

Tax records from 1840 indicate improvements to the Foster property totaling $150, and a decade later her real estate was assessed as valuing $450. In 1860, its value had risen to $4,000, with Foster’s personal property totaling $300.

The Foster family continued to reside on the property until 1906.

"Foster’s name appears in the University of Virginia’s faculty minutes in 1834, detailing an incident on May 31 in which several students had “conducted themselves in a disorderly manner” in Canada, throwing flower pots and attempting to enter her home. She is mentioned again on June 3, 1837, this time in the journal of the faculty chairman, John A. G. Davis. Students regularly rioted and fired off weapons, which were banned from the university’s grounds, and Davis noted that they may have been storing their arms at Foster’s home. It is not clear how she may have come to hold the weapons, why, or whether any action was taken, although free blacks were themselves prohibited from possessing firearms. Davis was shot and killed three years later by a student." 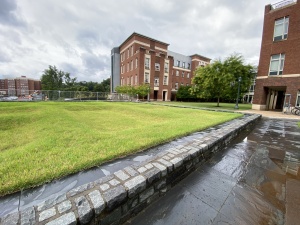 A corner of the Foster burial ground (left) in the shadows of Nau and Gibson Halls at the University of Virginia.

In 1993, archaeologists discovered about a dozen graves there, in what has come to be known as the South Lawn of the University of Virginia. Twenty more were found in 2005, and in 2011, President Teresa A. Sullivan dedicated a small park and memorial to Foster that includes a “shadow catcher” outlining the footprint of Foster’s house and nearby cemetery.

The site was added to the Virginia Landmarks Register in 2016.