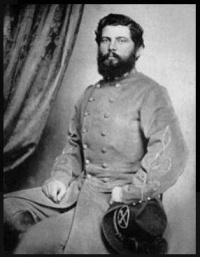 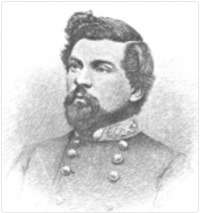 Major general (CSA) Thomas Lafayette Rosser (October 15, 1836 – March 29, 1910), also known as Tex Rosser, was best known for his “hit and run” raids and owner of Rugby Hall on Preston Height's. Referred to as the "Savior of the Valley" by the Southern press, he was a favorite of J.E.B. Stuart and recognized by "the Yankees" for his daring cavalry raids, efficiency in handling combat troops, and tactical brilliance during the Civil War (1861–1865).

Some of these items have been copied from corresponding articles from Wikipedia. Please feel free to rewrite to fit Charlottesville's distinctive scope and perspective.

Born on a farm called "Catalpa Hill", in Campbell County, Virginia, the son of Col. John Rosser and Martha Melvina Johnson Rosser. In 1849, the family relocated to a 640-acre farm in Panola County, Texas. Texas Congressman Lemuel D. Evans appointed Rosser to the United States Military Academy in 1856. However, Rosser did not complete the required five-year course of study, as Rosser, a supporter of Texas secession, resigned when Texas left the Union on April 22, 1861 two weeks before the scheduled graduation. Thomas Rosser's flatmate at the academy, George Armstrong Custer was a close friend, and despite being on opposing sides, this friendship continued both during and after the Civil War ended.

After leaving the United States Military Academy, Rosser traveled to Montgomery, Alabama, the provisional capital of the Confederacy, to enlist. He was commissioned a first lieutenant and became an instructor to the famed "Washington Artillery" of New Orleans. He commanded its Second Company at the First Battle of Manassas in July 1861. He was noted for shooting down one of George B. McClellan's observation balloons, a feat that won him promotion to captain. He commanded his battery during the Seven Days Battles of the Peninsula Campaign, and was severely wounded at Mechanicsville. Rosser was promoted to lieutenant colonel of artillery, and a few days later to colonel of the 5th Virginia Cavalry. At Antietam, his men screened Robert E. Lee's left flank. He temporarily assumed command of Fitzhugh Lee's brigade during the subsequent fighting against Alfred Pleasonton. He was again badly wounded at the Battle of Kelly's Ford and was disabled until the Gettysburg Campaign, where he commanded his regiment in the fighting at Hanover and the East Cavalry Field at Gettysburg. He was promoted to brigadier-general of the "Laurel Brigade," which had gained fame under Turner Ashby. He was distinguished again in the 1864 Overland Campaign, driving back a large force of Union cavalry and artillery at the Battle of the Wilderness. Rosser was yet again wounded at Trevilian Station, where his brigade captured a number of prisoners from former West Point classmate and close personal friend George Armstrong Custer. His brigade later "gallantly fought against Philip Sheridan in the Shenandoah Valley, and he efficiently commanded Fitzhugh Lee's division at Cedar Creek." A favorite of J.E.B. Stuart, he was recognized by "the Yankees" for his daring cavalry raids, efficiency in handling combat troops, and tactical brilliance during the Civil War (1861–1865).

Rosser was prominent during the Appomattox Campaign, capturing a Union general and rescuing a wagon train near Farmville. He led a daring early morning charge at Appomattox Court House on April 9, 1865, and escaped with his command as Lee surrendered the bulk of the Army of Northern Virginia. Under orders from the secretary of war, he began reorganizing the scattered remnants of Lee's army in a vain attempt to join Joseph E. Johnston's army in North Carolina. However, he surrendered at Staunton, Virginia, on May 4 and was paroled shortly afterwards. 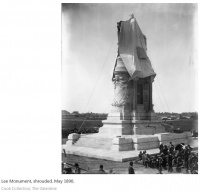 Rosser was superintendent of the National Express Company, working for fellow ex-Confederate general Joe Johnston. Later he was chief engineer of the Canadian Pacific.

In 1886, Rosser and his family retired to his plantation property Rugby Hall on Preston Heights, in what is part of the Venable Neighborhood. On this 200 acre plantation[2] he became a gentleman farmer. He would occasionally appear as a guest speaker at Confederate reunions and social gatherings.

On May 29, 1890, Major General Thomas L. Rosser commanded 200 Confederate Veterans, including Thomas L. Preston, from Charlottesville’s J. Bowie Strange Camp in the procession of the Robert E. Lee Statue unveiling on Monument Avenue. The event was covered extensively, both by local and national press. The Robert E. Lee equestrian sculpture, didn’t go up until nearly 25 years after the Civil War.

On February 24, 1910, Rosser was appointed Charlottesville's Postmaster General. After returned home from the Post Office on Friday, March 18, 1910, Rosser was taken with a chill whereupon Dr. E. E. Magruder was called to Rugby Hall. From that time on, symptoms of "broncho-pneumonia" increased. The old soldier faded away on Tuesday, March 29, 1910 at his home Rugby and was laid to rest in Riverview Cemetery.[3]

General Rosser and Miss Bettie B. Winston of Hanover, were married in 1863. She and three of their children survived him, they were: Mrs. Campbell Cochran, of Big Stone Gap, Va; Thomas L. Rosser, Jr., of Denver, Colo., and Mrs. Virginia Rosser Elliott, of Charlottesville.

There are three streets in the City of Charlottesville named in his honor: