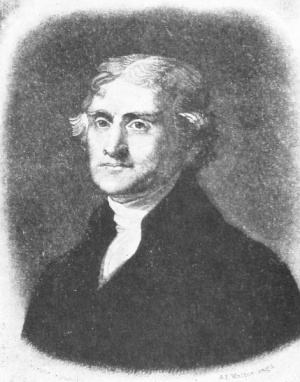 Thomas Jefferson (April 13, 1743 — July 4, 1826), draftsman of the Declaration of Independence of the United States and the nation’s first secretary of state (1789–1794) and second vice president (1797–1801) and, as the third president (1801–1809), the statesman responsible for the Louisiana Purchase. An early advocate of total separation of church and state, he also was the founder and architect of the University of Virginia and the most eloquent American proponent of individual freedom as the core meaning of the American Revolution.[1]

Colloquially referred to as "TJ", Thomas Jefferson's presidency initiated the quarter-century rule of the "Virginia Dynasty" (1801–1825) in which four of the first five presidents were from Virginia - including the loyal Jeffersonian Republican Party James Madison (1809–1817) and James Monroe (1817–1825). The first Virginia president, George Washington (1789–1797), is the only United States president who did not represent a political party.

Albermarle county, where Jefferson was born, lay in the foothills of the Blue Ridge Mountains in what was then regarded as a western province of the Old Dominion. His father, Peter Jefferson, was a self-educated surveyor who amassed a large estate that included 60 slaves. His mother, Jane Randolph Jefferson, was descended from one of the most prominent families in Virginia. She raised two sons, of whom Jefferson was the eldest, and six daughters. [3]

TJ designed both Monticello and the University of Virginia which both appear on the United Nations Educational, Scientific, and Cultural Organizations World Heritage List. Jefferson returned often to Monticello, “Little Mountain,” his home from 1770 until his death in 1826. Thomas Jefferson is buried at Monticello, about 2 miles southeast of City of Charlottesville.

Although Jefferson is buried at Monticello, Jefferson’s heirs ordered a replica be placed at Monticello and donated the original three-part structure to the University of Missouri in 1883. Jefferson's original tombstone is located in Columbia, Missouri. Near the end of his life, probably when he prepared and signed his final will in March 1826, Thomas Jefferson designed his own gravestone and prepared the text to be engraved on it. Here was buried Thomas Jefferson Author of the Declaration of American Independence Of the Statute of Virginia for religious freedom & Father of the University of Virginia.

Many local streets, businesses and organizations are named in his honor Jefferson's notable influences on the area include: 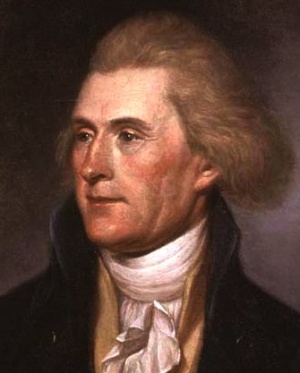 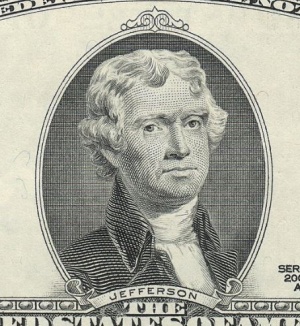 Laid out in 1802, after a plan for an “ideal city” by Thomas Jefferson, Jeffersonville’s main street includes a variety of architectural styles, with Italianite the most prevalent. Also, Jeffersonville was once a hub of the Union Army. Old Jeffersonville Historic District was placed on the National Register in 1983, the district is bound by Court and Graham Streets, the Ohio River and Route 65.[5]

Down river, Less than two miles, is Clarksville, IN and the George Rogers Clark home site (1803-1809). Located at the lower end of the Falls of The Ohio, Clark built a cabin in 1803 on a rocky point above the fall that now overlooks Corn Island and Louisville, which he founded in 1778. It was George Rogers Clark whom Thomas Jefferson first asked to lead an expedition to the Pacific in 1783. From this site Meriwether Lewis, William Clark, and the nucleus of the Corps of Discovery launched their expedition on October 26, 1803.