The Crossings at Fourth and Preston

The Crossings at Fourth and Preston is a 60-unit single resident occupancy facility operated by Virginia Supportive Housing in downtown Charlottesville. The total project cost was $8.2 million. [1]

Half of the units are dedicated to the chronically homeless and the rest are for low-income residents.[2] Construction got underway in April 2011[3] was completed in March 2012.[4]

The project was considered a success and Virginia Supportive Housing has worked with the Charlottesville Redevelopment and Housing Authority on a second facility in Charlottesville. However, the proposal was delayed in early 2020 because the project was not sufficiently ready to move forward for low-income housing tax credits.

In 2009, Virginia Supportive Housing (VSH), a Richmond-based non-profit organization, began exploring the possibility of building a multi-unit SRO facility for homeless individuals in Charlottesville. The units were planned to each be 360 square foot studio apartments with a full kitchen and a full bath. VSH sought a location that was central to public transportation and jobs. [5] 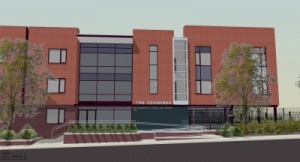 The city of Charlottesville purchased land from Region 10 on behalf of VSH at a cost of $1.55 million.[2] The city will contribute to annual operations as well by committing 21 federal housing vouchers to future tenants of the facility, at an estimated cost of $170,000 a year.[2] The source of this money is federal HOME funding. If those funds decline, the city will need to spend money directly from the Charlottesville Housing Fund.[2] City Council agreed on December 6, 2010 to enter into a ten-year agreement guaranteeing the funds.

However, the city may have to sell the land to VSH because the VSH can't obtain a $900,000 loan because the city's lease is not long enough. Virginia law puts a cap of 40 years on the term of a lease between a municipality and a private entity, and the Virginia Housing Development Authority requires at least a 60-year lease.[6]

Albemarle County had agreed to use nine of its federal housing vouchers to proceed with the project. However, nine potential residents are unable to move in as of May 30, 2012 because the U.S. Department of Housing and Urban Development requires the county to formally change its housing plan before the vouchers can be committed to the project.[7] The county amended its administrative plan with HUD on June 6, 2012 and As of June 6, 2012 whether it will accept the plan.[8]

In FY20, Virginia Supportive Housing received $670,000 from the Charlottesville Affordable Housing Fund for the Crossings II project at 405 Levy Avenue and 405 Avon Street but agreed to return the money after deciding to postpone the project for another year. [15]