The Strategic Investment Area is a City Council study and initiative launched in early 2012 to identify and shape potential redevelopment opportunities in a 330-acre section of Central Charlottesville.

The final report was appended to the city's Charlottesville Comprehensive Plan in February 2014 on a 4-1 vote. [1] [2]

The firm Cunningham Quill from D.C. was hired as the consultant. Work got underway in February 2013 and a report was presented to Council in December 2013. [3] In February, Lee Quill said the process would be a way "to create a new neighborhood that can re-weave the city back together." [4]

At the end of 2016, City Council agreed to hire a consultant to write new zoning for a section of the SIA area. The Charlottesville Planning Commission voted 6-0 to defer consideration of the plan at its November 12, 2019 meeting. [5]

In 2018, the Congress for New Urbanism awarded Cunningham & Quill a Charter Award for the plan. [6]

The first action taken to create the Strategic Investment was in March 2012 when City Council approved up to $150,000 to study the area around the Belmont Bridge but not including the deteriorating structure. [7] At the time of the meeting, the phrase "strategic investment area" was not used. Specifically, NDS Director Jim Tolbert wanted the plan to help shape the redevelopment of property on Levy Avenue owned by the Charlottesville Redevelopment and Housing Authority as well as Crescent Halls. At the time, City Councilor Kristin Szakos expressed concern the money would be diverted from public housing towards a general plan. [8]

During the 2013 update and review of the city's Comprehensive Plan, City Councilor Kathy Galvin called for the city to create small area plans that would direct city investment in public infrastructure. [9]

The city had conducted similar studies such as as the 2010 redevelopment master plan for Charlottesville Redevelopment and Housing Authority properties and the Torti Gallas study of 2000.

Galvin specifically used the term "strategic investment areas" to describe locations covered by the plans.[when?] At a February 2013 work session of the Charlottesville Planning Commission, planning manager Missy Creasy cautioned against the use of that phrase because of the potential it might to scare people who lived there that a sudden transformation was going to be underway. 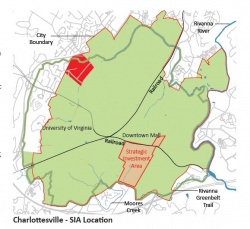 The boundaries for the study area are the CSX/Buckingham Branch Railroad line, Rialto Street, Ridge Street, and Palatine Avenue, as well as a small northern spur into the Martha Jefferson neighborhood. [10]

The area makes up less than 5 percent of the city's 10.4 square miles. The SIA includes sections of the Fifeville, Belmont-Carlton, Ridge Street and Martha Jefferson neighborhoods.

Residential areas include two Charlottesville Redevelopment and Housing Authority sites and the subsidized Friendship Court community. The greenway is shown as traveling on the eastern portion of their Friendship Court property, prompting concerns from the Piedmont Housing Alliance that their ability to redevelop the site would be compromised. [11]

In the late 19th century until the mid-20th century, the area was home to various industrial companies such as the Charlottesville Lumber Company, the Charlottesville Ice Company, and the Frank Ix and Sons Textile Mill. As these buildings began to close, jobs began to leave the SIA area. Following the destruction of Vinegar Hill in the name of urban renewal, large blocks were created to serve as a home for subsidized and public housing. [10] 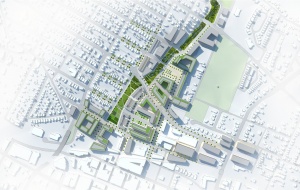 Overview of area from Dec 2013 report

The study team traveled to Charlottesville in the middle of March 2013 to hold meetings with stakeholders, including a walk-around the 330 acres with about 20 people. [12] Joy Johnson, a public housing activist, said the community needed jobs.

The concepts evolved over the spring and summer of 2013. Architects hired as part of the project said they were looking to create industrial space as well as providing spaces where people could live "car-lite." [13]

The main vision of the plan envisions building a new mixed-income and mixed-use neighborhood along a new linear park to be built along a daylighted Pollocks Branch. The waterway currently travels underneath the ground through the area. The new greenway would serve as an open space that would help create a sense of place and would include pedestrian connections to the rest of the community.

Additionally, a civic plaza would be created adjacent to the greenway to serve as the central area for the SIA. New retail would surround the plaza, and a pedestrian connection to the downtown mall would be strengthened along Second Street E. [13]

In December 2013, Quill said the plan is a template that could create up to 1.4 million square feet of new commercial space and as many as 1,300 homes. [3]

The plan was added to the Comprehensive Plan on a 4-1 vote on February 3, 2014 with Councilor Bob Fenwick as the lone vote against. At the time, [[[Brandon Collins]] asked that it be kept out until the impact on public housing properties would be more clear. Couuncilor Dede Smith was concerned that the directives in the SIA plan would take precedence over the zoning, but Councilor Kristin Szakos this would not stop landowners from developing. Fenwick was concerned that city staff should be working on the zoning and not the comprehensive plan. [14]

To facilitate the development, design standards were also established and the city was encouraged to create a new city overlaying district and to examine the possibility of form-based zoning. That has not occurred as of the fall of 2015.

In additional to Cunningham Quill, other firms that worked on the plan include Bolan Smart Associates and Kittleson & Associates. [10] 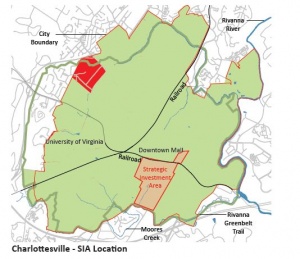 Public housing advocates were skeptical from the beginning and remained so. [4] [16] Joy Johnson said in February 2013 that she was concerned about Quill's use of the phrase "new neighborhood."

A resident of Sixth Street public housing said in December 2013 expressed her skepticism. [3].

Eugene Williams said he was concerned the result would be similar to the urban renewal that lead to the razing of Vinegar Hill. [17]

Three years after the plan got underway, there had been no person identified as a point person within city government to oversee implementation. [18]

In February 2016, Galvin asked for an action plan to be developed and noted that nothing seemed to have occurred in the two years since the SIA plan was adopted as part of the Comprehensive Plan. Alexander Ikefuna, Tolbert's replacement, said the city managed to secure Smart Scale funding to improve the streetscape along a portion of High Street, which is included within the boundary of the SIA.

Ikefuna also pointed out that the Burnett Commons projects were moving forward and that the Ix property had become an art park. Ikefuna was ordered to return with an action plan in March. [19] Council adopted the action plan in early April 2016. [20]

The Ridge Street Neighborhood Association used their April 2016 meeting to provide a briefing on the SIA. One item of note was the allocation of $80,000 to the Daughters of Zion Cemetery within the SIA boundaries. [21] [22]

A joint work session of City Council and the Planning Commission was held on August 15, 2019 to discuss the draft Form-Based Code for Phase 1A of the Strategic Investment Area.