From Cvillepedia
(Redirected from Stephen Williams)
Jump to: navigation, search 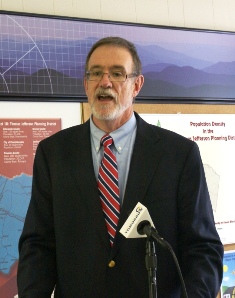 Stephen W. Williams took over as the director of the Thomas Jefferson Planning District Commission on May 11, 2009[1]. Prior to this position, Williams served as executive director of the Nashua Regional Planning Commission (NRPC) in New Hampshire. Under Williams’ leadership, the NRPC was recognized as a leading regional planning commission. He received gubernatorial appointments to the state’s Climate Change Task Force and the Freedom’s Way Heritage Commission. He also was vice-chairman of the New Hampshire Rail Transit Authority.

His contract was not renewed in the summer of 2013 following concerns related to mishandling of a federal grant. [2]