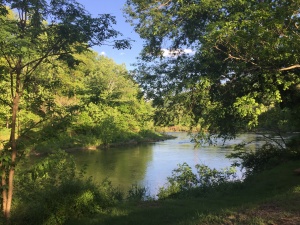 Because of the common border, the Thomas Jefferson Planning District Commission was tasked in 2017 with overseeing a plan to inform land uses on both sides of the Rivanna. One aspect of the plan involved reviewing existing conditions in order to help inform a joint vision. This work began in part after being identified in the TJPDC's One Community initiative in the early 2010's. Albemarle and Charlottesville in July 2014 opted to prioritize river planning at a joint strategic planning session, followed by approval of a three-plase planning initiative in 2016. [7]

A second phase is set to kick-off in June 2019 with the meeting of a technical committee. [8]

Work is underway on a second phase that focuses on land uses in the urban area. It has not yet been adopted by the Charlottesville City Council or the Albemarle Board of Supervisors. [9]

Former Planning Commissioner Bill Emory has called for the Rivanna to play a significant role in the future of the city. Others such as Mayor Satyendra Huja have agreed.[10]

In August 2012 Albemarle and Charlottesville officials called for a joint planning session that would focus on economic development in the Woolen Mills neighborhood and river area. Officials have suggested that pedestrian access and use of the area would be among the session's primary focuses, as would expanding the commercial uses. The joint planning commission meeting is scheduled for Sept. 18, 2012.[11]

The Thomas Jefferson Planning District Commission was directed by Charlottesville City Council and the Albemarle Board of Supervisors in 2014 to study how the river could become an asset for the community. Their plan was endorsed by the city and county planning commissions in January 2017. [12]

In October 2018, the Virginia Department of Environmental Quality began a technical study of the North Fork Rivanna River watershed. Rainfall from Orange, Greene, Louisa and Albemarle counties drain into the watershed of the North Fork. [13]