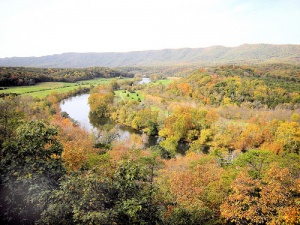 Shenandoah National Park is a U.S. national park encompassing part of the Blue Ridge Mountains. Long and narrow, with the Shenandoah Valley on the west side, and the Virginia Piedmont on the east, the most prominent feature of the Park is the scenic Skyline Drive. Almost 40% of the land area (79,579 acres) has been designated as wilderness and is protected as part of the National Wilderness Preservation System.

Albemarle County contains a small portion of the park in its most southeastern extremity.[1]

Shenandoah National Park was established in 1935 when the Civilian Conservation Corps began building visitor's centers. The majority of the park was finished by the beginning of World War II. [2] The park was dedicated on July 3, 1936 by President Franklin Delano Roosevelt. [3]

On July 18, 2012, environmental activists met at Darden Towe Park to discuss Congressional legislation they consider dangerous to Shenandoah and other Virginia wildlife. Among the bills discussed were The American Lands Act (H.R. 2588), which would direct the federal government to sell certain Federal lands to reduce the deficit and Wilderness Development Act (H.R. 2834), which would allow access to off-road vehicles on Federal land. The conference coincided with the release of the report, “Trashing our Treasures: Congressional Assault on the Best of America,” by Environment America.[5]