From Cvillepedia
(Redirected from Scott's Landing)
Jump to: navigation, search 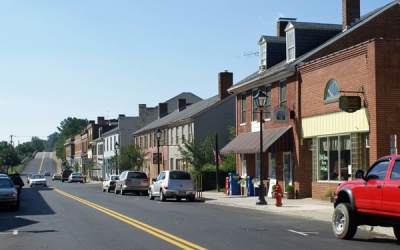 Scottsville is a town at the Horseshoe Bend along the James River located partly within Albemarle County and partly within Fluvanna County. It had a population of 566 when the 2010 Census was taken. [1]

In 1744, the courthouse for the new County of Albemarle was established at a site that would latter became known as Scott's Landing. This site was to west of the present day Town of Scottsville. The house of Edward Scott was used as a temporary courthouse until one could be built. This site was used as the county seat until 1762 when a new courthouse was erected in the new Town of Charlottesville. Gradually all evidence of this early community faded from site and history. [3]. 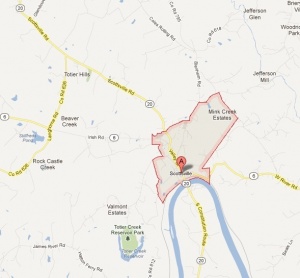 The General Assembly established Scottsville as a town in 1818[3] and it was officially incorporated in 1833 at the northern-most point of the river[4]. Scottsville was founded as a river town with a tobacco inspection station and a ferry. It served as a port on the James River for the batteaux that traveled up and down the river. The original town was formed around 15 acres owned by Dr. John Scott. The town expanded rapidly, especially after the Kanawha Canal on the James River was completed to Scottsville in 1840[3]. Growth was curtailed near the end of the Civil War when in 1865 US General Phil Sheridan, along with General Custer, came through the town. Five weeks latter these troops were at Appomattox. A massive flood in 1870 set the town's economy back, as well as further flooding in 1877 and 1888[3].

In 1944, the United States Rubber Factory established operations in Scottsville, reviving the economy. However, many people commuted to their work, and did not move to the town. Population declined to as few people as 239 in 2000[3]. A massive flood control project was completed in 1989, enabling the town to escape the constant threat of flooding. This factory closed in early 2009 and now sits empty. Town leaders would like to redevelop the site and have received a planning grant from the Virginia Department of Housing and Community Development. [6]

Scottsville was established in 1818 and incorporated in 1833. The town operates under a mayor-council form of government with its own Town Administrator and Clerk. The six-member Town Council and the mayor are elected from at-large districts for a term of two years. Until 2022, elections were held on the first Tuesday of May in even-numbered years. Under the Charter[7], a mayor and six member council constitutes the governing body of the town.

Town Councils met for many years in people's homes. [9]

Other town boards include the Planning Commission, the Scottsville Architectural Review Board, and the Board of Zoning Appeals. The Planning Commission develops a Comprehensive Plan every five years to guide development, updates the town’s Zoning Ordinance, and hears zoning issues. The Architectural Review Board’s role is to protect the character of the historic district by reviewing plans for new construction and alterations to structures within the historic district and entrance corridors. The Board of Zoning Appeals hears requests for variances to the zoning ordinance and appeals of determinations by the zoning administrator. Each of these boards is filled by volunteers receiving no compensation for their time and effort, other than the satisfaction of knowing they have given their best to serve the community.

On May 24, 2022, the town administrator Matt Lawless issued an advertisement an interim appointment opening on the town council to fill an unexpired term through December 31, 2022. Councilor Stuart Munson is retiring after three years of service. The only legal requirement for Council service is to be a registered voter in town. Town Council will appoint a qualified town resident to serve in the interim, the appointee could serve for six months only, or they could run for another term in the November 2022 election. [10]

R. Daniel Gritsko and Meredith C. Hynes are running in the general election for Town of Scottsville Council Member on November 8, 2022.[11]

On May 24, 2022, the town administrator Matt Lawless issued an advertisement an interim appointment opening on the town council to fill an unexpired term through December 31, 2022. Councilor Stuart Munson is retiring after three years of service. The only legal requirement for Council service is to be a registered voter in town. Town Council will appoint a qualified town resident to serve in the interim, the appointee could serve for six months only, or they could run for another term in the November 2022 election. [12]

Scottsville is among 16 cities and 107 towns across Virginia that were affected by a law, passed by the General Assembly and signed by the Governor that went into effect on July 1, 2022, which moved May municipal elections to November.[13] As previously set by the the town's Charter, several council members’ terms expired on June 30, 2022. In 2022, 172 Town Council elections will be held in Virginia.[14]

Legislation signed by the Governor went into effect on July 1, 2022 mandating that city and town elections move from May to November: SB 1157, passed Virginia General Assembly (2021) and signed into law by Gov. Ralph Northam went into effect on July 1, 2022. The law shifted all municipal elections to November for city and town councils and school boards previously holding elections in May, beginning with elections held after January 1, 2022. The bill stated no leaders term should be shortened by the change, and that a current official will remain in office until November; cities and towns currently holding elections in May shall provide for the transition of elections and terms of mayors, council members and school board members with terms set to expire on June 30 may continue in office until their successors are elected and qualified.

On March 21, 2022, the Scottsville Town Council voted 4-3 for a special use permit to allow 36 units on Bird Street as part of an infill development project. [15]

The elections for Mayor and Town Council of Scottsville were held in May 2018. Scottsville voters elect a mayor and six members of town council. [19]

“We’re pretty dependent on our meals tax because we’re one of the only towns that doesn’t have its own property tax levy,” Town Administrator Clark Draper said. In a copy of the proposed budget, the meals tax accounts for the largest portion of the town’s revenue, a little more than 22 percent.

In 2010, Scottsville Planning Commission heard a request from a developer to re-zone 50 acres of rural land under the town's jurisdiction to make way for a new residential neighborhood. The commission unanimously recommended approval[21]. The town currently encompasses 979 acres[3].

The town completed the second phase of a streetscape improvement project in 2012. [22] The $700,000 beautification project was intended to add streetlights and handicap accessible ramps.