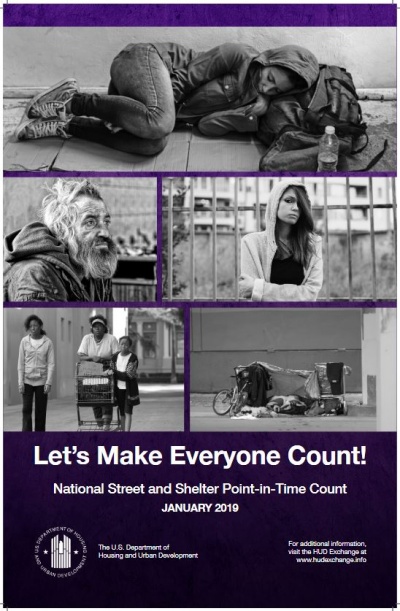 The Point-in-Time (PIT) count is a count of sheltered and unsheltered homeless persons on a single night in January. HUD requires that Continuums of Care (CoCs) conduct an annual count of homeless persons who are sheltered in emergency shelter, transitional housing, and Safe Havens on a single night. CoCs also must conduct a count of unsheltered homeless persons every other year (odd numbered years). Each count is planned, coordinated, and carried out locally. The Housing Inventory Count (HIC) is a point-in-time inventory of provider programs within a CoC that provide beds and units dedicated to serve persons who are homeless, categorized by five Program Types:[4]

The Charlottesville region had 250 individuals experiencing homelessness in 2012 according to The Haven (formerly the Thomas Jefferson Area Coalition for the Homeless), which conducts the annual Point-in-Time count.Charlottesville, Virginia Embraces Housing First to Tackle Regional Homelessness U.S. Department of Housing and Urban Development (HUD Source of Data Numbers: facilities, housing numbers for each

What is the official definition of homelessness?

There is more than one “official” definition of homelessness. Different agencies use different definitions of homelessness, which affect how various programs determine eligibility for individuals and families at the state and local level. Health centers use the HHS definition in providing services.[7]

Programs funded by the U.S. Department of Housing and Urban Development (HUD) use a more limited definition of homelessness [found in the Homeless Emergency Assistance and Rapid Transition to Housing Act of 2009 (P.L. 111-22, Section 1003)].

Health centers funded by the U.S. Department of Health and Human Services (HHS) use a different, broader definition of homelessness:

An individual may be considered to be homeless if that person is “doubled up,” a term that refers to a situation where individuals are unable to maintain their housing situation and are forced to stay with a series of friends and/or extended family members. In addition, previously homeless individuals who are to be released from a prison or a hospital may be considered homeless if they do not have a stable housing situation to which they can return. A recognition of the instability of an individual’s living arrangements is critical to the definition of homelessness. (HRSA/Bureau of Primary Health Care, Program Assistance Letter 99-12, Health Care for the Homeless Principles of Practice)

The Point-in-Time (PIT) Count, an annual effort led by the U.S. Department of Housing and Urban Development (HUD), is a count of sheltered and unsheltered homeless persons on a single night in January. The Point-in-Time Count, as a one-night survey of the homeless population, does not represent a definitive census of the homeless. Instead, it offers a general snapshot of what is happening in the community.[9] HUD requires that Continuums of Care (CoCs) conduct an annual count of homeless persons who are sheltered in emergency shelter, transitional housing, and Safe Havens on a single night. to estimate the number of homeless Americans, without safe, stable housing nationwide to help direct resources based on need.

What the PIT Count Measures

The PIT Count is among the ways estimates the homeless population nationwide to help direct resources based on need.

The PIT Count and what it measures

The most recent PIT Count was conducted in January 2019.

Vagrancy Act of 1866 Overseer of the Poor