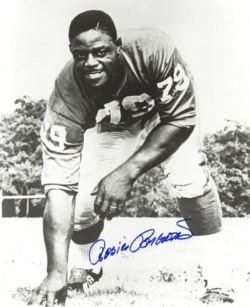 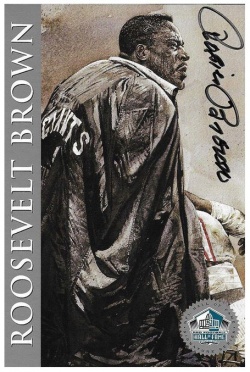 Not to be confused with Rosey Grier

Roosevelt "Rosie" Brown (October 20, 1932 – June 9, 2004) was a native of the City of Charlottesville and developed into one of the premier offensive linemen in pro football. Following a star-studded high school football career at Jefferson High School, Brown went on to earn a football scholarship and a degree from Morgan State University. Drafted by the New York Giants in 1953; he was the league's lineman from 1953 to 1965.[1]

Brown was born in Charlottesville and lived with his family in the Fourth Ward, at 230 Fifth Street NW[2], near what is now called the Starr Hill and the Fifeville and Tonsler Neighborhoods Historic District neighborhoods.[3] His father, Roosevelt Brown, Sr. (1910 - 1963), was a railroad worker who was out of town much of the time.[4] The younger Brown recalled his youth as follows:

"I was always a big boy. When I was 6, my mother put me in school and I took a test. I must have passed it because they put me in third grade. No first grade and no second grade. That meant I graduated from high school when I was 15 and from college at 19. When I played my first game for the Giants, in 1953, I was still 19."[5]

Brown played football at Jefferson High School, at that time the city's only African-American high school during segregation. He played trombone in the school's band, having been forbidden to play football after his older brother was injured playing the sport and died.[6] The school's football coach, Robert W. Smith[7], ultimately persuaded the 180-pound Brown and recruited him to play football,[8] though he did so initially without his father's knowledge.[5][6] (Alternative accounts state that Brown was drafted against the wishes of his father, Mr. Brown, whose own brother had been killed playing football.)[9] Coach Smith said, "The band director almost wanted to fight me for him. He said that 'Rosey' [sic] would be a great trumpet player, and I said he'd be a great blocker. I just couldn't see a 210 pound kid playing the trumpet."[7]In all of his football experiences in high school and college, Brown had never played either with or against a white player, let alone under a white coach.[10]

After retiring, Brown served as the Giants' assistant offensive line coach and later joined the scouting department. He was with the New York Giants for 50-plus years in various capacities. Brown was inducted into the Pro Football Hall of Fame in 1975 and in 2000 was chosen for NFL's 75-year anniversary team.

In June 2004, at his home in the Columbus, New Jersey, Brown suffered a heart attack while gardening. He died at age 71. He was survived by his wife, the former Linda Lock, two stepchildren, and two sisters.[8][16] According to the New York Times obituary, he was survived by stepson, Kyle Anglin of Montclair, N.J.; a stepdaughter, Tiffany Anglin of Petersburg, Va.; three stepgrandchildren; and two sisters, Lyria Hailstork and Mary Page, both of Charlottesville.[17] 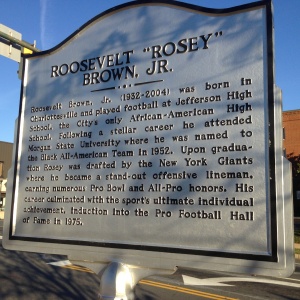 Well known locally for being the first African American professional football player from Charlottesville to be named to the NFL Hall of Fame, Roosevelt Brown Boulevard is a street named in his honor.[20]