The Annexation and Revenue Sharing Agreement is a 1982 legal agreement between the City of Charlottesville and Albemarle County that prohibits the City from annexing County land, effectively in exchange for a transfer of County real estate tax revenue to the City according to a complex formula. The transfer amount is capped at 0.1% of the assessed value of real estate in the County, and was met every year prior to FY2016. In terms of nominal dollars, the transfer amount peaked in FY2011 at $18.5M, and has decreased every year except FY2018, but has been effectively flat in terms of real dollars.

The agreement is the product of a series of conversations between the city and county designed to limit the city's annexation efforts. A committee formed in mid-1977 to discuss ways to increase cooperation before the two jurisdictions. Talks of development increased in 1980 when the city explored another round of annexation. [1]

At the end of a temporary annexation moratorium in 1980, the city’s acquisition target encompassed a '10 Square Mile Area' (approx.), from the Rio/29 interchange out to the Pantops region and down to 5th Street South. There was also talk of a larger area under consideration, extending farther north and west and potentially annexing up '32 Square Miles Area' (approx.), of the county. [2] 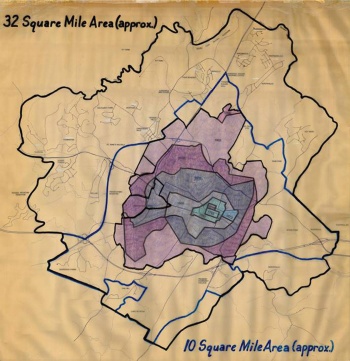 The Annexation and Revenue Sharing Agreement prohibited the City from annexing any County land (except Pen Park) and set up a mechanism by which, following a formula involving population, real property assessments, and tax rates, one entity would transfer revenue to the other, though in practice the transfers have always been from the County to the City, as intended.

Key features of the agreement are that:[3]

This description of the revenue sharing agreement between the City of Charlottesville and Albemarle County appears in Albemarle's annual budget.[4]

An Annexation and Revenue Sharing Agreement, dated February 17, 1982, between the County of Albemarle and the City of Charlottesville was approved in a public referendum on May 18, 1982. The agreement required the County and the City to annually contribute portions of their respective real property tax bases and revenues to a Revenue and Economic Growth Sharing Fund. Distribution of the fund and the resulting net transfer of funds will each be made on January 31 while this agreement remains in effect.

During the time this agreement is in effect, the City will not initiate any annexation procedures against the County. Also, pursuant to this agreement, a committee was created to study the desirability of combining the governments and the services currently provided. The agreement became effective on July 1, 1982 and remains in effect until:

Charlottesville City Council held a public hearing on the idea on March 15, 1982 and ratified the agreement afterwards. [5]

Q: What is the Revenue Sharing Agreement?

A: In 1982, Albemarle County and the City of Charlottesville entered into a revenue sharing agreement in which both jurisdictions agreed to share tax revenues in return for total immunity from any annexation attempts by the City. The City was proposing a significant annexation of County territory at that time to increase the City tax base. The proposed agreement was approved by County voters in a referendum.

For as long as the agreement remains in effect, both the County and the City are required to contribute annually to a Revenue and Economic Growth Sharing Fund which is then divided between them on the basis of a formula related to population changes and “true real property tax rates” as determined by the Virginia Department of Taxation. Due to the nature of the formula and the conditions in the City and the County since 1982, the effect of the agreement is that the County has paid the City a revenue sharing amount every year equivalent to the ten cent tax rate cap., the revenue sharing payment totaled $18.4 million, this year we anticipate that the revenue sharing payment will decrease by $365,000 to a total of $18 million. This is the first decrease in revenue sharing since the agreement was established in 1982.

Q: Can the County discontinue the Revenue Sharing Agreement?

A: The Revenue Sharing Agreement is legally binding and must remain in effect until one of the following occurs:

The City and County are consolidated or otherwise combined into a single political subdivision, or

The concept of independent cities is altered by state law in such manner that real property in the City becomes part of the County tax base, or

The City and County agree to cancel or change the agreement.

In early 2010, the Albemarle County School Board asked Delegate Rob Bell to insert an amendment that would change the way the composite index is calculated in order to factor in the amount Albemarle pays to Charlottesville in revenue sharing. Though the amendment failed, the issue caused friction between the two communities. In April 2010, both school board met with the City Council and the Board of Supervisors to discuss the issue. A committee was appointed to further discuss the issue. They held their first meeting on August 25, 2010.[8] There was criticism that these meetings were held behind closed doors. [9]

Delegate David Toscano called on the city to use a portion of the payment for capital projects that would benefit both communities. [10]

However, those talks stalled and the Board of Supervisors directed Bell to reintroduce the amendment in the 2012 General Assembly. Supervisor Dennis Rooker, who voted against the idea in 2010, changed his mind after negotiations failed.

Ned Michie, chair of the Charlottesville School Board, argued in a 49-page report that the county knew what what would happen to county school funding when it agreed to the agreement in 1982. Rooker disagrees. [11]