From Cvillepedia
(Redirected from Redfields Neighborhood)
Jump to: navigation, search

Redfields is a residential neighborhood in Albemarle County's Neighborhood 5 south of Charlottesville. Construction of the development began in 1990 by the Redfields Development Corporation. As of January 2011, 441 of 656 units approved by the board of supervisors have been built.[2] 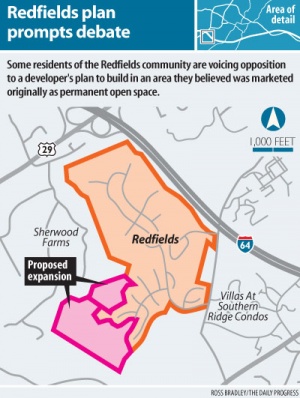 The developers of Redfields have applied for a comprehensive plan amendment to expand the county's growth area to allow them to build 138 more units on 58 acres of land that is classified as rural. On November 30, 2010, the Albemarle County Planning Commission voted 4-2 to include the amendment as part of a Spring 2011 review of the county's comprehensive plan.[3]

Not satisfied with the action by the Albemarle County Planning Commission in November 2010, on December 20, 2010, the Redfields Development Corporation filed a zoning map amendment (i.e. rezoning) with Albemarle County.[4] The developer states that the expansion area, known as Redfields Phase 5, has always been intended for development as it is part of the original planned residential development (PRD). The neighborhood has argued that the land was designated as open space and should remain undeveloped, particulary since it is outside the county's designated growth area. As of January 2011, the rezoning request is under review by Albemarle County staff.[5]

The Board of Supervisors voted unanimously on December 14, 2011 to deny the rezoning application. [6]