Philena Carkin (1838 – 1926) taught at and was the second principal of the original Jefferson School in Charlottesville. 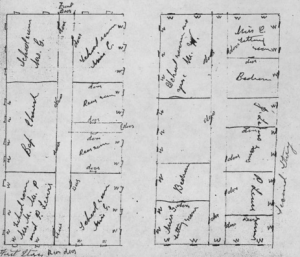 Carkin joined the teaching staff of the Jefferson School in 1866, shortly before the Union troops left Charlottesville. Anna Gardner had founded the school a year prior. She lived in the Delevan barracks with Anna Gardner. Both women were paid by the Freedman’s Bureau.[2] Carkin named her classroom at the Freedmen's School the "Lincoln School."[2]

The school initially operated out of the Delevan or "Mudwall" building on Main Street, located behind the site of present-day First Baptist Church on Main Street. This building had served as a Confederate hospital during the Civil War and then Union barracks during occupation, but was repurposed by the War Department as a Freedmen’s School during Reconstruction. The two women lived in the complex with the soliders and several emancipated Black families who were permitted by the military to take shelter in the compound. Carkin described Mudwall as “an immense brick building… in an advanced state of dilapidation.”[1] Eventually, the disrepair reached a point where a new location was necessary. The members of the teaching staff (Gardner, Carkin, Isabella Gibbons, Paul Lewis, and his wife Margaret Lewis) were able to move into a nearby schoolhouse with at least eight available rooms. The schoolhouse was outside of the city of Charlottesville but between it and the University, directly next to the Orange and Virginia Railroad tracks.[2]

After Gardner left the Jefferson School in 1871, Carkin took over as principal. She continued to teach.[2]