Pen Park is the largest park in the city, comprising 280 acres. It is from this park that Park Street takes its name[1]. 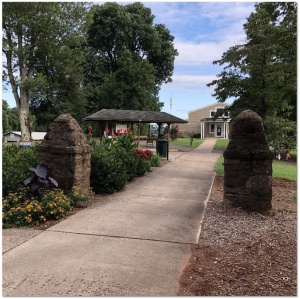 The Lynch family once owned the Pen Park land, until they left Albemarle behind. After Lynch left, the land was later acquired by John Harvie. In 1777, Dr. George Gilmer purchased the land and his family owned it until 1800[3].

A cemetery on the current golf course has graves from several local families, the Gilmers (1777-1800), the Cravens (until the Civil War), and the Hotopps, who grew grapes on the land for their winery into the early 20th century. The Gilmers seem to have the most significant presence in the old graveyard. Dr. George Gilmer and his family owned Park Mill (later called Cochran’s Mill), the 18th-century miller’s house on Meadow Creek still standing.[4].

In 2019, an investigation uncovered unmarked burial sites outside of the Gilmer cemetery. [5]

One of the alignments for the proposed Eastern Connector was depicted as traveling through Pen Park[6].

Pen Park's southern and eastern border is the Rivanna River, and together with the northern northern border of the park form the border with Albemarle County. Opposite the river to the south sits Darden Towe Park.