City Council has been wrestling with complaints about downtown parking since the 1930’s. Charlottesville’s trolley (animal drawn in the 1880’s, electrified by 1895) displaced horses, wagons, and carriages—but was itself displaced by the automobile. By 1915 it was clear the greater convenience of the gasoline powered “jitney” would doom the trolley; by 1935 Charlottesville began paving over trolley track, making room for increasing numbers of cars.[1]

By 1939 automobile congestion had reached the point that Charlottesville’s Chief of Police attempted to regulate parking by installing a newly invented mechanical device called the parking meter, on Main Street—now the Downtown Mall.[2] “Then as now, Charlottesville’s business owners argued that business suffered when parking spots were taken up by the same car all day.”[2] The original 100 meters were for a ‘trial period only’, five cents for sixty minutes.”[3] The original 100 grew to 1000, and the three month trial extended into the next several decades.[2]

A survey of traffic in the city was conducted in 1947 by the Virginia Department of Highways and a report was published on March 1, 1948. Among the conclusions was that 80 percent of cars within the city had destinations inside of Charlottesville. [4] "The practical saturation point has been reached," read the study which cataloged Specific recommendations on parking included better signage, removing curb cuts and creation of loading zones for trucks. [5] Additionally, two-hour space were to be converted to one hour spaces. [6] Other suggestions included purchasing land on Water Street and Commerce Street for off-street parking. [7]

On September 8, 1953 City Council approved parking meters in the city-owned parking lots on High Street, Water Street, Seventh Street, and Williams Street. Meters were also approved for Jefferson Street with a two-hour limit. [8] These meters were purchased at a cost of $21,000 but they were not installed until after the holiday shopping season that year. [9] The Chamber of Commerce petitioned for the right to place nickels in the meters but Council denied this later that year. [10]

Meters to regulate parking notwithstanding, complaints about parking as the “number one problem for downtown Charlottesville” recurred throughout the next decades—and continue to this day.[11] Proposed and rejected solutions included a 1951 proposal to dig up Lee Park and turn it into underground parking.[12] [13] The recurring theme is that ”everybody wants a parking space, but very few want to pay for one;” and that “a shortage of free parking in the area makes the nearby shopping centers with their abundance of free parking more attractive.”[14]

City Council held a public hearing to discuss an off street parking ordinance in 1956, but could not hold a debate since no one supported the measure. [15] Council unanimously passed a revised measure later that year exempting Downtown and West Main to Elliewood Avenue.[16]

A traffic survey Charlottesville commissioned in 1957 referred to the tension between short term parking needs for shop customers and all-day parking for employees.[17] The survey recommended increasing parking meter rates from five cents per hour to five cents per half hour, and building parking lots and garages for all-day parking.[17] To compete with the convenient free parking at the then new Barracks Road Shopping Center, downtown businessmen pooled their resources in 1959 to form the Charlottesville Parking Center Inc. - a private company supplementing on-street metered spaces by subsidizing free parking for customers in lots and garages.[18]

After converting Main Street to the Downtown Pedestrian Mall in the 1970's, City Council removed most parking meters on surrounding streets, again primarily to compete with free parking at suburban shopping malls. Council voted on September 5, 1978 to eliminate 139 meters on Market and Water Streets and 35 on West Main Street. City Manager Cole Hendrix cited the construction of Fashion Square Mall as justification for removing the parking. At the time, the existing signs for two-hour parking were erected. [19]

The Daily Progress editorialized in 1993 “increasing parking meter rates, raising parking fines, and stepping up measures to collect fines—are punitive measures that will make the mall less attractive . . .” [20] The Market Street garage built in 1975, and later the Water Street Parking garage which opened in 1995, were both intended to relieve pressure on free on-street parking.[21]

Hoping to strike the proper parking balance, the city has commissioned at least seven parking studies, about one a decade since the 1940's—though more often than not it has ignored the results.[22] Council rejected a parking study recommendation to create a new system of zones in February 2009.[23] City Council also rejected the study's recommendation to consider replacing time limit signs with parking meters.[24] “I think the free parking that we have downtown … creates a better, more inviting atmosphere for visitors downtown,” [then Mayor] Dave Norris said in 2009.[24]

The city also began a policy in the late 20th century where streets could petition the city to require permits to park on them. Council approved such a permit requirement for the 500 Block of Lexington in June 1991. [25]

Charlottesville has repeatedly grappled with the difficulty of balancing the competition for limited parking among shops and restaurants and their customers, commuting workers, residents, students, tourists, government and court personnel, and others.[26] 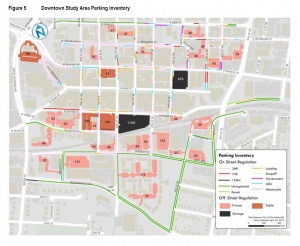 At Mr. Brown's instigation in 2014 Charlottesville's Office of Economic Development obtained from City Council funding to update the 2008 consultant's study that recommended metered parking (rejected after a series of public hearings in 2009 and 2010).[27][23] The resulting 2015 consultant's study, unveiled at an October 1, 2015 work session, recommended installing meters where parking is most in demand, while at the same time keeping some spaces free.[30] City Council has asked for an implementation plan including cost estimates for a new city parking department and so-called "smart meters", and was to hold public hearings on the proposal.[30]

On April 5, 2016, City Council approved a six month test of new parking meters downtown. The western and eastern boundaries will be Second Street West and Sixth Street East, respectively. Market Street will be the northern border and the railroad tracks will serve as the southern limit. In all, 157 parking spaces would be converted to metered spots. Council voted 4-1 to approve the program with Bob Fenwick voting against. [31] [32]

The pilot began on September 5, 2017 with a fee of $1.80 an hour in the affected areas with a two-hour maximum. A mixture of single-space and multi-space meters will be used. As part of the plan, the Market Street Parking Garage will offer one hour of free parking and the hourly rate will be reduced from $2.50 to $1.50 an hour. [33] However, the program was suspended during the holidays and will resume on January 2, 2018. [34] On January 2, 2018, City Council voted to suspend the pilot indefinitely, pending re-evaluation one year later.[35][36][37] As of March 2019, the program had not been re-evaluated.

Talk continued of a new parking garage on Market Street. On December 2, 2019, Council considered spending $1.28 million to purchase Albemarle County's share of land on Market Street for a 300-space garage with 12,000 square feet of commercial space. [38] [39]

In 2019, the city received one application from a neighborhood to designate some on-street parking as requiring a permit. This This was the block of 11th Street NW between Gordon Avenue and West Street in the 10th and Page neighborhood. [40]

On November 17, the Parking Advisory Panel passed a resolution calling for enforcement of parking violations to be turned over to a contractor and taken away from the police. [41]