The Pantops Master Plan was approved by the Albemarle County Board of Supervisors at their meeting on March 17, 2008. [1] A revision process began in early 2018. [2]

In 1980, Albemarle County adopted a Comprehensive Plan that designated five percent of the county's 726 square miles for growth and the rest for rural uses. As part of that philosophy, each growth area was to have undergone a master plan to guide the placement of county-funded instrastructure.

In September 2007, the Board of Supervisors held a public hearing to listen to public input on the draft plan, where they requested additional information from county staff to further evaluate several issues raised in the public hearings.

The county wrote the plan to incorporate the principles of the Neighborhood Model of development. The plan provides a "framework for transportation, land use, design guidelines, and public infrastructure.

"Public participation has been critical to the development of the draft plan, with residents, property owners, and other stakeholders working with county staff and consultants to develop the five guiding principles which capture what is most important for a high quality of life in Pantops. These principles include respect for natural, historical, and scenic assets, especially the Rivanna River system, new development that fits with existing character, housing choices, improving pedestrian systems, addressing transportation issues, and providing adequate community facilities and services."

A Pantops Community Advisory Council was formed as a citizens' oversight body to help shepherd the plan.

In 2006, the Albemarle Planning Commission held a Work Session to discuss the preliminary draft recommendations and maps of the Pantops Master Plan, with an emphasis on Transportation and neighborhood connections in Pantops. The Executive Summary report cited a priority of the Pantops Master Plan was to improve linkages to the City of Charlottesville and noted "road crossings of the Rivanna River, south of Free Bridge, have been explored, including a connector to High Street from the Pantops Shopping Center and a connection from State Farm Boulevard to Market Street. The report noted A Rivanna River crossing to High Street in the City of Charlottesville is the preferred option...further discussions with the City of Charlottesville is needed and that engineering cost feasibility had not been fully considered." The report also noted the Eastern Connector Study would provide information helpful to deciding whether this project should be pursued. The property owner of Pantops Shopping Center has indicated a willingness to discuss the road connection and has noted that they would not like to see the east wing of the shopping center, with the Food Lion, and the Roses wing impacted by the road project."[4]

The Draft Pantops Master Plan, issued in October 2006, supported an Eastern Connector and recommended a second Rivanna River Crossing south of Free Bridge into City of Charlottesville be considered. The Master Plan also recommended future improvements at Rt.250/Rt 20 and the I-64 Interchange and the relocation of Hansen’s Mountain Road.[5] The final Pantops Master Plan was adopted on March 17, 2008; amended on July 16, 2011 and again on June 10, 2015.[6]

By 2016, some grew concerned that the vision of an urban area called for in the plan had not been realized. [7] A citizen-led initiative to study a possible grade-separated pedestrian bridge did not have the support of the Board of Supervisors. [8] 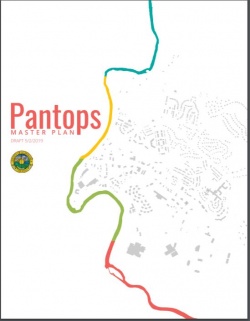 The draft implementation chapter breaks down recommendations into two categories. The Policy and Coordination Projects are ones that the plan identifies as requiring support and coordination between stakeholders and the county rather than capital investment. Capital projects are those projects that have received an initial cost estimate and could be eligible for Albemarle's Capital Improvement Program.