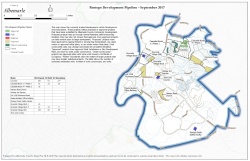 Click to enlarge the development pipeline map for Pantops

The Pantops Community Advisory Council is a citizens' oversight panel that was created to shepherd the implementation of the Pantops Master Plan. They generally meet on the fourth Monday of the month at the Sentara Martha Jefferson Hospital Conference Room.

The group began meeting in June 2008, after the plan was adopted by the Board of Supervisors. [1]

There is some concern that county budget cutbacks will decrease the effectiveness of the council as well as the bodies created for other master planning areas. The groups will only be able to officially meet three times a year. [2] However, this was restored to monthly meetings in 2011.

The group was known as a council until being renamed as a committee in March 2015. [3]