From Cvillepedia
(Redirected from PACC)
Jump to: navigation, search 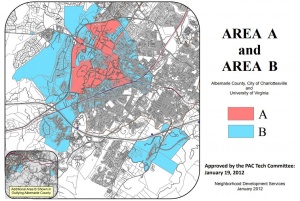 The Planning and Coordination Council (PACC) is a defunct forum for planning at the University of Virginia, Charlottesville, and Albemarle County that has been in operation for over 30 years.

On October 3, 2019, the group met to consider disbanding itself. [1] Charlottesville City Council and the Albemarle Board of Supervisors agreed to do so on a one-year basis in early November 2019. [2] The change has become permanent.

PACC was replaced by the Land Use and Environmental Planning Committee, which is closed to the public.

All three jurisdictions took turns hosting the meetings. The University hosted the meetings in 2019.

The 1986 PACC agreement was formed by the City, County and the University in with the intent to foster "improvement of community and mutual benefits through cooperative planning" and collaborate on items of mutual interest within designated geographical areas referred to in the original Three Party Agreement as Area A, B, and C community map. The regularly scheduled meetings were intended to afford all parties the opportunity to receive updates on the planning process and use of land in the areas close to the University, i.e. guidelines and improvements and expectations for land that abuts all three entities and land of mutual interest PACC provides a platform where these matters can be brought forward, discussed and, if necessary, brought forward to the larger elected bodies as part of Comprehensive Plan adoptions. [3]

The Planning & Coordination Council (PACC) was established in 1986 as part of the original to promote cooperation in planning and community development among the City of Charlottesville, Albemarle County, and the University of Virginia.

There used to be a PACCTech meeting held quarterly and the coordination of those meetings was shared and rotated between the three governing bodies on a yearly basis. The membership of PACCTech and PACC changes on a yearly basis depending on local elections and committee appointments, and both meetings are open to the public. [4]

The PACC Tech sub-committee reports to the PACC.

In the months before the agreement was signed, the county was in the process of rezoning land at the intersection of Fontaine Avenue and U.S. 29 for a project known as Fontaine Forest. The city and University were opposed to the project. The city thought it would put too much pressure on a residential street. UVA thought it was land they might want to own one day. [6]

The Albemarle County Board of Supervisors held a public hearing on May 14, 1986 on an agreement "improvement of communication and mutual benefits through cooperative planning." County Executive Guy Agnor stated before the hearing opened that the agreement "dealt primarily with the planning process and the use of land in areas close to the University."

Area B was to be studied and master planned by all three jurisdictions, and any proposals were to be mutually reviewed.

In Area C, the University agreed to pay property taxes on land it owned.

The draft agreement also set out that UVA would create a real estate foundation, The University of Virginia Foundation, would would pay property taxes and abide by all land use regulations in the city or county. At this time, UVA also agreed to name non-voting members from the city and county to the UVA Master Planning Committee. [7]

Two supervisors and the county executive were appointed to the body on June 11, 1986. They were Supervisor Timothy Lindstrom and Supervisor Gerald Fisher and executive Guy Agnor. [8]

At a meeting in 1987, the PACC members discussed how the University Transit System and Charlottesville Area Transit could work together to avoid overlapping routes. They also asked for various studies of the Area A and Area B locations, including a Fontaine Avenue study that Albemarle Supervisors agreed to fund at their meeting on May 13, 1987. [9] Board chair Peter Way was named to the PACC in November shortly before the final PACC meeting of 1987. [10] At that meeting, the PACC requested funding for a study of regional transit. The Board of Supervisors endorsed that concept at their meeting on December 9, 1987. [11]

Coordination of the Charlottesville and University of Virginia's transit systems were discussed earlier in the year. They approved a series of recommendations including intersystem transfers, joint schedule publications, joint marketing efforts, reduction of duplicate routes, a transfer point at University Hall, joint purchasing, equipment sharing, and shared coordination of driver training. Council adopted the recommendations at the meeting on March 18. [12]

There was also a review of a study of the Blue Ridge Hospital. City Councilor Elizabeth "Bitsy" Waters stated that work was underway to unify land use plans for Fontaine Avenue, Ivy Road, north Grounds, 9th and 10th street. There was also talk of development of a news sports arena. The PACC-Tech body was designated as being responsible for coordinating entrance corridor guidelines. [13]

The University sought support from Albemarle and Charlottesville for federal funds for a pedestrian crossing above Jefferson Park Avenue. [14]

In 2008, the University of Virginia hosted the meetings.

In 2009, Albemarle County hosted the meetings. 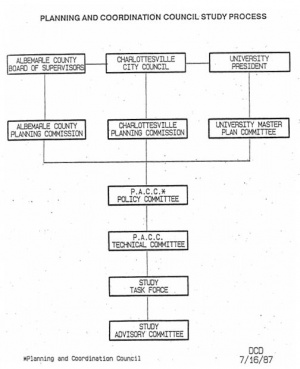 In 2011, the University of Virginia hosted the meetings.

In 2012, Albemarle County hosted the meetings.

In 2013, the City of Charlottesville hosted the meetings.

In 2014, the University of Virginia hosted the meetings.

In 2015, Albemarle County hosted the meetings.

The City of Charlottesville hosted the meetings. The initial meeting on February 18, 2016 was canceled. Meetings on May 19 and August 18 were held, but it is unclear if the meeting on November 17 was held.

In 2008, Albemarle County hosted the meetings.

In March, the group talked about regional transit issues, a potential convention center and a replacement hotel for the Cavalier Inn. [21] (Minutes from meeting)

On October 3, the group met in order to vote on a resolution to dissolve itself. The 'Proposal to Redefine the Planning and Coordination Council' states that "it is important to have a venue in which the City, County, and University can share land use and development plans and projects. However, this is a function better served by technical professionals who are developing those plans and can work together to ensure cooperation and collaboration." [1] (Proposed redefinition of PACC)