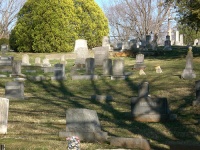 Oakwood Cemetery dates back to the 1860's and is located on 14 acres of land that was formerly part of Oak Hill, an estate owned by Alexander Garrett. [2]

Oakwood technically includes a 2-acre section that was originally called the Daughters of Zion Cemetery, even though it is located on Oak Street across Ridge Street. This cemetery was created in 1873 and was the burying place for many prominent African-American citizens such as Benjamin Tonsler. [2]

City Council allocated $1,000 in February 1957 to purchase more land for the cemetery from the estate of Hugh R. Hawkins. [3] In May 2012, City Council sold this land to Southern Development.[4]

Southern Development partnered with Habitat for Humanity and proposes to build 47 mixed-income housing units on 3.5 acres adjacent to the Oakwood Cemetery property.[4] The two parcels were bought by the city in 1957 and 1944. The original purchasers intended purpose for the property is unclear. [4] The property was sold by the city for $10 because of the extensive cleanup costs associated with the property. City Council stated that, at some point in its history, this property was used to bury construction debris. [4]

City of Charlottesville's site for Oakwood