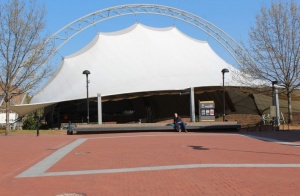 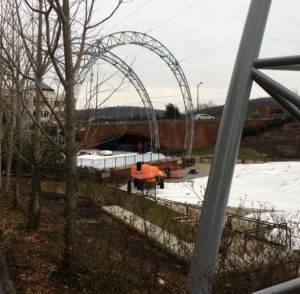 In early 2019, enhancements to the structure included a fresh coat of paint for the steel and construction of the new roof.

The Charlottesville Pavilion is a covered amphitheater located at the east end of the Downtown Mall. It is home to concerts and other events, including Fridays After Five. It opened in 2005[1]. City Council considered a proposal to sell the advertising rights to cell phone company nTelos at its meeting on April 4, 2011. [2] The structure was named for one telecommunications for many years and is now named after another one.

On December 15, 2003, the City entered into a lease with the Charlottesville Industrial Development Authority to begin negotiations with a third-party for the construction of an entertainment facility in downtown Charlottesville. [2] Nine months later, CIDA subleased the space[3] to Charlottesville Pavilion LLC, an entity controlled by Coran Capshaw [citation needed]. The two leases allowed for the pavilion to be built.

The sublease gives provision for Charlottesville Pavilion LLC to sell the naming rights, but gives the city and the CIDA the power to ratify the chosen sponsor. The sublease also gives 100% of the proceeds to Charlottesville Pavilion LLC. Kirby Hutto, general manager of the Pavilion, notified the city in a March 24, 2011 letter that nTelos had agreed to purchase the rights for an undisclosed amount. [4][dead link]