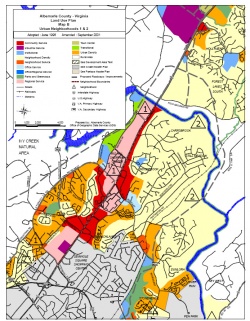 Neighborhood 2 is a Designated Growth Area and the second largest of the Northern Development Areas, consisting of 2,981 acres generally located to the east of US 29.

The meandering Rivanna River forms the eastern and northern borders of the neighborhood, with the City of Charlottesville serving as the southern border.

"This area has seen continued growth since 2009, with a number of multi-family units constructed near Route 29 at Arden Place and a mix of singlefamily and multi-family units in Belvedere. The East Rio Road corridor has seen continued growth, potentially spurred by the availability of R4 Residential-zoned land and the completion of the John Warner Parkway.

Though a limited number of developable parcels remain in the area, those that do are typically large acreages. A large parcel designated for Urban Density Residential / Neighborhood Service Center use at the corner of John Warner Parkway and Rio Road East represents one of the largest remaining development sites in the County's Urban Ring. A number of large parcels also exist between the Belvedere/Dunlora developments and the Rivanna River, though their development potential may be limited by access needs and extensive floodplain.

The Rio29 Small Area Plan, which was adopted in December 2018, anticipates future growth and redevelopment in the vicinity of Rio Road and Route 29." [1]

A small strip of gas stations and other commercial properties along Rio Road is known as Gasoline Alley, and is considered to be a future neighborhood center under the Places29 Master Plan.

There are two major roads in Neighborhood 2: US 29 and Rio Road East. The Meadowcreek Parkway, under construction, as of 2011, will provide an additional north-south corridor for cars, bikes and pedestrians.

Category for neighborhoods located within Neighborhood 2