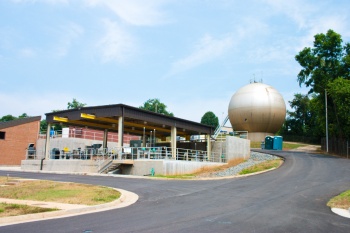 The Moores Creek Wastewater Treatment Plant treats wastewater at a design flow of 15.0 million gallons per day (MGD) with a discharge to Moores Creek.

The plant was built in two phases. The first section was built by the city of Charlottesville in the late 1950s and "included a grit basin, grit decanting bed, pre-aeration basins, intermediate, primary and final clarifiers, primary and secondary trickling filters, sludge drying beds, and primary and secondary digesters"[1]. This first section was completed in the spring of 1960 at a total cost of $1.1 million. The city paid for it through sale of $500,000 in bonds, a $212,000 grant from the Federal Water Pollution Control Act and $388,000 from a special reserve funded by a special tax levied since January 1954. [2]

The second phase consisted of an upgrade on the south side of Moores Creek in 1981, and "incorporated preliminary screening and grit removal, daily flow equalization, primary clarification, biological treatment, secondary clarification, chlorination and tertiary settling in flocculation and settling basins, as well as in final clarifiers." [1].

"In 1988, the aeration basins, which provide biological treatment, were retrofitted with limited modifications in an attempt to create an initial anoxic zone. Due to the fact that the anoxic zone is mixed using diffused aeration, the existing facility configuration can not reliably provide significant biological nutrient removal. Solids are thickened, anaerobically digested, and compressed through filter press equipment before disposal." [1].

In July, 2012, Moores Creek celebrated the completion of its $48 million upgrade, the first of its kind since the mid 1980s. The upgrades included installation of new technologies to maximize water treatment as well as the addition of new structures, which increase the plant's peak flow capability to 38 million gallons per day. The upgrades drastically reduce the amount of nitrogen and phosphorous that is deposited in the Chesapeake Bay, creating algal blooms.

In addition, a new Combined Heat & Power (CHP) generator was installed that can be run on the biogas created onsite, making the plant partially self-sufficient. The self-sufficiency of the plant could generate approximately $2 million in economic activity through the sale of unnecessary energy credits.[3]

The RWSA is under a consent order from the Virginia Department of Environmental Quality to upgrade the facility to have a peak flow capacity of 45 MGD by April 30, 2013. [4] The engineering firm Hazen and Sawyer designed the expansion, and construction took place in 2010 through 2012. [5]

Enhanced nutrient removal operations began at the wastewater plant in May 2011 and have already helped the RWSA reduce the amount of nitrogren and phosphorous released into the Rivanna River. [6] Before the ENR was activated, nitrogren readings were frequently in the 10 to 15 parts per million range. In August 2011, the average was 2.90 ppm. [6]