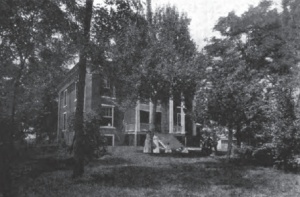 Monticola as it appeared in 1915

Monticola is a mansion built in 1853 [1] near Howardsville in Albemarle County built by Daniel James Hartsook in the years before the Civil War. The Greek Revival structure, which is currently[when?] on the market, was built on a plantation that predates its construction by many years. During the war, Monticola was at one point used by Union General Philip Sheridan as his headquarters[2].

In 2005, the mansion was purchased for renovation by Staunton-based Countryside, doing business as Dunterry LLC. The company worked with Frazier Associates to fix the house up and put it on the market. Renovations were completed in 2008.

In 1940, filming took place at Monticola for the feature film Virginia starring Madeline Carroll and Fred MacMurray[3]. Carroll played a character named Charlotte Dunterry, the same name used by the company that owns the mansion today.