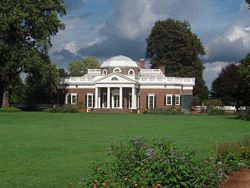 Like most museums, Monticello had to close in the early days of the COVID-19 Emergency. They reopened on June 13, 2020 under Phase 2 of the Forward Virginia plan. [1]

Construction of Monticello started in 1768 and was finished in 1805. The building was made almost entirely by materials which were prepared on site and was built mostly by slaves.

After Jefferson died in 1826, the house was sold in order to pay back debts acquired in Jefferson's lifetime. It was purchased by Commodore Uriah P. Levy in 1836. After Levy bought the mansion, it remained in the family until 1923 with the exception of its confiscation by the Confederate government during the Civil War. Public desire for the government to buy Monticello started as early as 1910, although Jefferson Levy said that he would never sell the mansion. However, after World War 1, Levy faced financial struggles which forced him to sell the house.[2]

The National Monticello Association announced on March 1, 1923, that it would purchase the estate from Jefferson Levy for a sum of $500,000.[3] Plans were announced in February 1925 to restore the home to the way it was in Jefferson's day.[4]

Connection to public water and sewer

The Albemarle County Board of Supervisors approved a plan in the mid-2010's determine to extend public sewer services to Monticello, its visitor center, and other buildings. The foundation also wants to extend water lines to fuel storage tanks in order to provide more protection from fire.[5]

Monticello was built largely by enslaved persons. Over 50 enslaved persons at a time worked on the mountain and tended to the upkeep of the building. However, most of the slave dwellings in Monticello, in an area called Mulberry Row, are no longer standing. Only the working areas within Monticello itself, such as the storerooms and the kitchen, are still standing.

In 2016, the Thomas Jefferson Foundation hired Gayle Jessup White and Niya Bates to help improve the way in which the story of slavery at the plantation is told. White was hired as a community outreach officer and Bates was hired as a public historian of slavery and African-American life.[7]

Monticello is located in Albemarle County and is administered by the Thomas Jefferson Foundation. Coordinates:

On September 17, 1974, the Jefferson Cable Corporation filmed a brief documentary at Monticello. This episode, narrated by Bernard Chamberlain, describes the history of the US Constitution.

Every Independence Day, a naturalization ceremony is held to welcome new American citizens. A notable speaker is selected each year.