The Meadowcreek Parkway Interchange an element of the city's portion of the John Warner Parkway and replaced an at-grade intersection of McIntire Road and Route 250.

The city advertised the project for construction in the fall of 2012 and the lowest bid was submitted by General Excavation of Waynesboro.[4] The city is verifying that bid and will make an award in March 2013, with construction expected to begin in summer 2013. 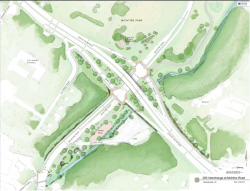 The final design was created the firm RK&K.[5]

The Federal Highway Administration issued a "Finding of No Significant Impact" on September 29, 2010, allowing the interchange to proceed to the next phase of construction.[6]

After the FONSI was issued, the Coalition to Preserve McIntire Park filed suit against the FHWA to stop the interchange's construction.[7] Judge Norman K. Moon filed a scheduling order on April 25, 2011, and testimony was heard on April 25, 2012.[8] On May 29, 2012, Judge Moon dismissed the Coalition's lawsuit, finding that the preliminary actions taken by the FHWA to estimate the proposed interchange's environmental impact were adequate. Moon also found that the project's impact on the "unique characteristics" (the Rock Hill Landscape and Dogwood Memorial, e.g.) of the surrounding area were not severe enough to warrant halting the project.[9] 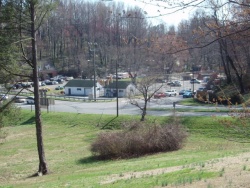 A cost estimate from January 2012 places the cost estimate for the project at $33.5 million, though the project could increase in cost.[5] The majority of funding comes from an appropriation of two federal earmarks[10][11] announced in 2005 totaling $27 million via former Senator John Warner (R-VA). Other funds come from the City's match as well as VDOT revenue sharing. This project is being managed by Charlottesville under the First Cities initiative, with technical support provided by VDOT.

There is an agreement among the city, county, and VDOT that the interchange must be grade-separated.[1] Some members of the community are alarmed that the north-south pedestrian and bike trails will have to cross the on-ramps leading to U.S. 250 at-grade.[12]

The Charlottesville Skateboard Park requires relocation due to the construction of the interchange.[13]

The project's initial development was overseen by a steering committee, appointed by the Charlottesville Mayor and City Council.