McIntire Park is a City of Charlottesville owned and maintained public park. Located along Route 250 Bypass/Veterans Memorial Highway, there are three major community focal points of the park: The east side of the park features the Charlottesville Skate Park and Vietnam Veterans Memorial (also called Dogwood Vietnam Memorial) on the south end, and the future Botanical Garden of the Piedmont on the north end. All three sections have their own parking areas. 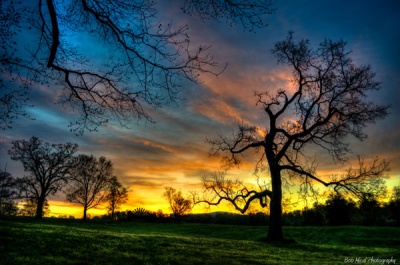 McIntire park is home to

The golf course is located on land that was part of the Rock Hill Farm until 1878, when it was purchased by Robert F. Mason. The land on which the golf course was developed was part of an 89.2-acre parcel obtained in 1925 by the city through condemnation proceedings that were financed by a donation from Charlottesville resident Paul G. McIntire. Between 1926 and 1941, adjacent parcels of land were obtained by the city and were included in the development of McIntire Park.

On April 7, 1926 during a special meeting of the Council the following resolution was unanimously adopted:

Note: Beginning in the 1920's, racially-restrictive deeds became a pervasive part of real estate transactions. Covenants were embedded in property deeds to prevent the properties from being gifted, sold or used by people of specific races or ethnicities—most often targeting Black Americans. Failure to obey a restrictive covenant could result in monetary penalties.

Philanthropist and Charlottesville native Paul Goodloe McIntire’s efforts at civic beautification and improvements spanned throughout the city and University of Virginia during the City Beautiful Movement of the 1920's.

Initial development of the golf course occurred in the early 1930s, as public desire for a course increased. Local civic and social organizations raised money by subscription to develop the course, and by 1938 the course was in operation.

In the 1940's, a trial experiment with lighted of tennis courts took place. The Young Men's Business Club paid for the endeavor. [1]

The city's portion of the John Warner Parkway runs along the eastern edge of McIntire Park. The Coalition to Preserve McIntire Park pursued a series of lawsuits to stop construction, including one against the Federal Highway Administration which was heard on April 25, 2012.[2] On May 29, 2012, Judge Norman K. Moon dismissed the case against the FHWA, allowing the project to proceed.[3]

McIntire Park was home to a nine-hole golf course that was to have been disrupted or eliminated by Parkway construction. The group Save McIntire Golf advocated for retention of the course in some form because it was home to the First Tee of Charlottesville, a program that sought to educate children about golf and leadership. Golf activities ceased by the end of 2015. [4] That was a year ahead of schedule. [5]

McIntire Botanical Garden, a non-profit group, is creating a botanical garden in the east end of the park in areas that have been home to the municipal golf course. However, they are seeking a new name. [citation needed]

The Piedmont Family YMCA constructed a fitness and aquatic center in the western half of the park. A group called the McIntire Park Preservation Committee had formed to try to prevent this construction, or at least to ensure that the construction does not eliminate two softball fields at the park.

The project was stalled for many years pending resolution of a Virginia Supreme Court case that claimed Charlottesville and Albemarle County broke Virginia's procurement laws by not allowing private companies to submit a request for proposals to operate an aquatic facility on city-owned land. [6] [7] The court heard the case in the spring of 2012 and threw out the case in January 2014. [citation needed]

Financing was secured in late 2015 allowing the project to break ground.

Fund-raising is underway for a memorial garden that will commemorate those who have won the Paul Goodloe McIntire Citizenship Award. The Charlottesville Regional Chamber of Commerce and a citizens group. They had raised nearly half the $600,000 for the project, which will see a stone terrace around a grove of decades-old oak trees. [8]

The construction of the U.S. Route 250 bypass ran through the park, with one section of the old park becoming what is now Greenleaf Park. Another former section, at the southeast end of McIntire Road near the rescue squad, initially became tennis courts and is now the Charlottesville Skateboard Park.

As construction of the parkway loomed, the city conducted a master plan for the eastern side of the park. Council discussed the matter on February 6, 2012. [9]

In September 2012, City Council adopted a master plan for eastern side of the park. [10] That process began in the fall of 2011 with three public meetings. More public meetings have been held in 2012[11]. The Parks and Recreation Advisory Board held a public hearing in March 2012. [12]

The Final Master Plan Report outlines planned changes to the park to be adopted, including the development of a trail and bike system. In addition, the Charlottesville Skateboard Park was relocated to the southwest side of the park, where currently there is parking for the golf course. The golf course itself was to remain open initially, but was to have reverted to passive use by the end of 2016. Upon its reversion to passive use, portions of the golf course may also be used for the expansion of the botanical gardens.

The wading pool was closed permanently following the conclusion of the 2013 season.[13]

The city hired multinational design corporation Stantec and Line + Grade to construct a skate park concept and Baltimore-based Mahan-Rykiel to design the park plan. [5] The skate park and the pedestrian bridge were officially opened on April 20, 2019. [14]