Botanical Garden of the Piedmont

Botanical Garden of the Piedmont (formerly McIntire Botanical Garden) is a non-profit organization that is seeking to build a botanical garden in the north end of of McIntire Park East. [1]

After years of negotiations, the group entered into a memorandum of agreement with the city of Charlottesville in late September 2015. [2]

In May 2018, the group selected Boston-based Mikyoung Kim Design and Charlottesville-based Waterstreet Studios to create a design for the park, based on community feedback. [3] [4] [5] The resulting Schematic Plan for the Garden received a National Award from the American Society of Landscape Architects for SIte Analysis and Planning. [6]

The organization is currently fundraising to turn the conceptual plans into construction documents. [7] 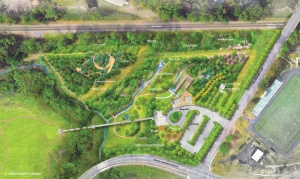 Schematic Plan of Botanical Garden of the Piedmont

The nonprofit group was founded in 2008 to advocate for a botanical garden within the city limits. At the time, the future of a McIntire Park transformed by what would become the John Warner Parkway was undetermined, and the group lobbied for the western half to become a garden that would preserve the area's natural beauty. [10] To get there, the group had to convince City Council to consider removing the golf course. As the roadway neared completion, the city's parks and recreation department began a master planning process to determine what would happen next. 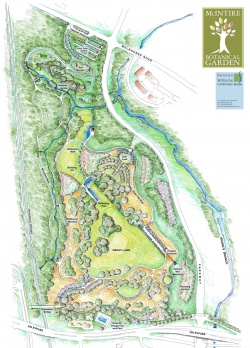 In October 2011, the group showed a preliminary concept designed by landscape architect Kennon Williams that envisioned using the entire western half of the park and included the existing wading pool. [11]

City Council adopted a master plan for the eastern side of the park on September 3, 2012 after an extensive planning process which included the cessation of the golf course by the end of 2016. While the plan called for a botanical garden or natural area in the northern section, it did not initially specify that Botanical Garden of the Piedmont would be involved. At that meeting, City Councilor Dave Norris indicated the group should be selected as the official partner. [12]

On January 27th, 2015 city parks staff drafted a memorandum of understanding which would guide the formal relationship between McIntire Botanical Garden and the City of Charlottesville. The agreement was signed in September 2015.

Charlottesville Botanical Garden was a competing non-profit organization with similar goals. At a McIntire Botanical Garden meeting held Aug. 28 2008, Lonnie Murray, a representative of that group, said he would be willing to merge the two groups. [13]