The Upper (circa 1885) and Lower (circa 1908) Ragged Mountain Dams create the Ragged Mountain Reservoir, a key component of the Charlottesville-Albemarle urban water supply maintained by the Rivanna Water and Sewer Authority. The Upper and Lower Ragged Mountain Dams will be taken out of service[1] with the construction of a new earthen dam built downstream during 2012-2013. The RWSA awarded a contract to Thalle Construction Company and issued a notice to proceed on April 23, 2012. [2] [3] Work completed in September 2014 after more than a decade of planning, permitting, and construction.[4][5][6]

“A stone masonry intake tower with a wood-frame gatehouse is located within the Upper Reservoir at about the midpoint of the embankment….A 10-inch outlet pipe and transmission line passes through the embankment and follows the original streambed downstream to the intake tower for the Lower Dam. Reportedly, a break exists along some point of the 10-inch transmission line that is located within the Lower Reservoir such that the pool levels for the Upper and Lower reservoirs equalize during normal low base flow conditions.”[8] 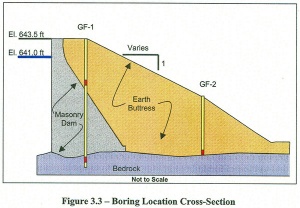 ”[T]he original structure is a 67-feet-high and 400-feet-long cyclopean concrete gravity dam founded on bedrock. The cyclopean masonry or concrete construction method represents a transition period (1870s-1920s) in dam building in the United States, between the earlier time when gravity dams were constructed of stone masonry and the later time when conventional mass concrete was used. Cyclopean concrete consists of embedding large stones (up to 6ft plus in diameter) commonly referred to as “plum” stones into wet concrete. Subsequently, the spaces between the plum stones were also filled with wet concrete to form a continuous matrix of concrete and plum stones throughout the structure. Often times, these structures did not have horizontal lift joints nor vertical contraction joints within the mass. Based on the construction photographs and record drawings, this also appears to be the case for the Lower Dam.”

“The gravity section geometry consists of a vertical upstream face and a sloping downstream face with an 8-inch horizontal to 1-foot (0.67H:1V) batter. The spillway for the structure is an open channel with an approximate 13-foot crest length located in the left abutment area. A concrete intake tower with a concrete gatehouse is adjoined to the upstream face of the gravity dam at about the midpoint of the dam crest…”

“According to information provided in the 1978 Phase I Inspection Report for the Upper Dam, an earthfill buttress was placed against the downstream face of the Lower Dam as explained in the following excerpt: ‘…It might be well to mention here that in 1934 it became necessary to strengthen this dam by guniting the upstream face and placing an earth embankment on the downstream slope. Both front and back of the dam were spalling badly and the dam was in generally poor condition.’”[11]

“As part of the federally sponsored National Dam Safety Program conducted in the late 1970s and early 1980s, both the Upper and Lower [Ragged Mountain} Dam were inspected to evaluate their design adequacy in terms of presenting any potential hazards to public safety. As a result of this inspection, both dams were found to have deficiencies and it was recommended that the identified deficiencies be further investigated.” [12]

The Ragged Mountain Reservoir is operated today with a conditional permit from Virginia Dam Safety Officials. The permit has been extended as the community has been in the process of implementing the 2006 Community Water Supply Plan which envisions construction of a new dam at Ragged Mountain.

In 2002-2003, as part of the development of options for the Community Water Supply Plan, Gannett Fleming evaluated alternatives for addressing dam safety issues in the event one or both of the existing dams was maintained in the fifty-year water plan.

Among the documents identified as used by Gannett Fleming in their February 2003 report, the 1912-1913 Report on Mayo's Rock Dam was not cited as a record of reference. The most recent review of the Mayo’s Rock Dam report was undertaken by the Ragged Mountain Dam Independent Technical Review Team Report in June 2009.

In July 2010, a regional engineer for DCR sent a letter to the RWSA's chief engineer stating that the dam is "inappropriate" to refer to it as "safe."[18].

A plan to build a new Ragged Mountain Dam at the reservoir has been under review as part of the 50-year community water supply plan (2005-2055). As part of the plan, the pool at the Ragged Mountain Reservoir would initially be raised 30’ with the construction of a new earthen dam, replacing the 1908 lower dam which State officials have been warning since 1979 needs repair or replacement.

Gannett Fleming worked during 2007-2008 on the preliminary dam design and geotechnical research before the project was temporarily halted in August 2008. In September 2009 the Rivanna Water and Sewer Authority replaced Gannett Fleming, retaining Schnabel Engineering Associates to prepare a preliminary design for the new dam.[20]

In January 2010, the City of Charlottesville decided to hire its own firm to develop a cost estimate for raising the existing Lower Ragged Mountain Dam by 13 feet as part of an amended community water supply plan. [21].

Increasing the height of the 1908 dam is one component of the “Norris Plan.” In June 2010, the city hired Black & Veatch to conduct the study[22]. Engineer Gregory A. Zamensky wrote in a letter to Lauren Hildebrand that "Black & Veatch believes the existing LRMD can be successfully modified to meet the Virginia dam safety requirements and provide greater water storage capacity"[23].

With negotiations between city and county stalling about how to proceed with planning for a new dam, the Albemarle County Service Authority agreed to pay for the design of the earthen dam to keep the project on schedule. In all, the ACSA agreed to pay up to $869,000 for the work. [24] [25]

Schnabel completed a final design of the new earthen dam in late April 2011, meaning the RWSA was able to meet a deadline imposed by the Department of Conservation and Recreation in order to get another extension. RWSA officials had hoped construction could begin in October 2011 upon the DEQ agreeing to a modification of a permit issued in February 2008. [26]

However, the DEQ indicated it considered the permit modification to be "major" which will trigger a public hearing. [27] The future of the dam was an issue in the 2011 City Council elections. Charlottesville Mayor Dave Norris has endorsed a slate of candidates who are opposed to the construction of the new dam and are in favor of dredging the South Fork Rivanna Reservoir. [27]

As the RWSA waited for the DEQ to authorize the permit modification, the Virginia Division of Dam Safety issued three permits in August 2011 that would allow construction of the earthen dam to go forward. [28]

The RWSA issued an RFP for proposals in early November 2011. Proposals were submitted by nine companies and the lowest bid was received from Thalle Construction Company of Hillsboro, North Carolina for $21,528,750.50. [29]

On December 28, 2011, the RWSA authorized Thomas L. Frederick to sign a construction contract with Thalle pending resolution of several loose ends. These include ratification of a cost-share agreement between the Charlottesville and Albemarle County; approval by the City Council of a land-use agreement allowing the RWSA to build the dam on land owned by the city; and for the Virginia Department of Transportation to complete a review of changes needed to an embankment where the reservoir meets Interstate 64.