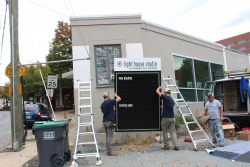 Light House Studio is a nonprofit filmmaking center dedicated to helping students develop their vision and show their work. It focuses on fostering the importance of collaboration and community, the creativity of young minds, and the lasting benefits of our mentor-based approach to teaching the art of filmmaking.

Founded in 1999, Light House Studio is moving into new headquarters at the old Vinegar Hill Theater. They were previously located on E Water Street and shares the same building as Live Arts and Second Street Gallery. [1]

Light House Studio was founded in 1999 by a group of local filmmakers, artists, and educators who began with a small pilot workshop, “Video Diary”. Since then we have helped youth create hundreds of documentary, drama, and animated films. The studio's student work has been broadcast on PBS, CNN, IFC (Independent Film Channel), and Public Access Television. Work has been exhibited at the University of Virginia Art Museum, Vinegar Hill Theater, Second Street Gallery, and Live Arts, among others. Light House films have been shown in festivals all over the United States. Several of our students have received national awards for their films, including a Peabody Award, a Gold World Medal at the New York International TV and Film Festival and a Golden Cine Eagle Award.

Light House Studio provides uncensored, mentored workshops in digital filmmaking; a screening room; a DVD, VHS and book library; and exhibition opportunities to young people, enabling them to learn, by hand, the pervasive language of motion pictures and sound. We challenge our students to be active participants in the media, and not simply passive recipients of the millions of images they see everyday.[1]

Light House Studio student work has screened at numerous film festivals and competitions since the studio was founded.