Kristin Szakos (D) was elected to two terms on the Charlottesville City Council. [2] [3] [4] 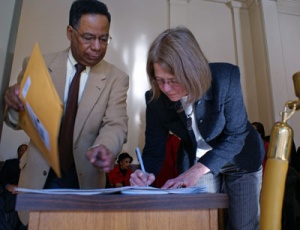 Kristin Szakos signing documents after being sworn in by the Hon. Paul Garrett on December 23, 2009

Szakos has been a Charlottesville resident since 1994 [citation needed]. She is married to Joe Szakos and has two daughters. She currently lives with them in the Locust Grove neighborhood. She was president of the Burnley-Moran PTO, served on the city Special Education Advisory Committee and the board of the Charlottesville Branch NAACP, and currently, as of 2011, serves on the Trinity Episcopal Church Vestry.[1] A former journalist, Szakos spent two years as Volunteer Coordinator for the 2008 Obama presidential campaign in Charlottesville.

Szakos and Councilor Satyendra Huja were potential candidates to succeed Dave Norris as Mayor of Charlottesville in late 2011.[6]

As a member of the council that appointed Maurice Jones, Szakos said that she and other community members who reviewed the candidates for city manager then felt Jones was the best fit for the job.

“He didn’t have the same degrees as some candidates, but degrees don’t necessarily make you a better manager,”

“It was a concern that he should have a degree, though, so that’s why we decided to pay for him to get his master’s.”

Szakos said she thinks that the city will “lose out” on part of its investment, but demurred when asked if she disagreed with the council’s decision to not renew his contract.

“As a former councilor, I don’t think they need me second-guessing their decisions,” she said. “I don’t think those investments were wasted. Now that [Jones] is going somewhere else, he’ll be a good manager there.”[7]

In January 2016, Szakos was assigned to the following committees. [8]

Each voter could vote for up to two candidates.

Szakos chose Valentine's Day to formally announce her campaign for a second term. Her campaign manager was Lisa Green. [13] Through May 29, 2013, Szakos had raised $2,941 in campaign foundations including a $1,000 donation from herself. [14]

Szakos also participated in a questionnaire on public housing conducted by the Public Housing Association of Residents. [15]

Kristin Szakos announced in February 2009 that she would run as a Democrat seeking one of two available seats on council.

At her campaign launch, Szakos told a crowd of supporters that she had never considered herself a potential candidate for political office until experiencing the Obama campaign. "I never thought that I’d want to run for office," said Szakos. "Yet here I am and I am feeling really good about it."

Szakos said she intends to channel the energy from the Obama campaign into local issues at City Hall. "We need to talk about why there are still such great gaps in opportunity and education in Charlottesville, and work hard to close them," said Szakos. "We need to speak out about inequality in a town as seemingly progressive and prosperous as ours, and we need to work to change it."

Szakos identified the following items as her campaign pledge:

Szakos faced incumbents Dave Norris and Julian Taliaferro in the first-ever unassembled caucus held by the Charlottesville Democratic Party on May 9, 2009. Szakos won the nomination along with Norris[17].

Szakos won the caucus and ran in the general election with fellow Democrat and Mayor Dave Norris[citation needed].

Overall voter turnout for City of Charlottesville in this election was 37.31%. Each voter could vote for up to two candidates.

At the 2012 Virginia Festival of the Book, Szakos asked civil war expert and former UVa professor Ed Ayers if the city should consider removing statues to confederate generals or balance them out with other statues.[19] The question generated criticism from members of the Albemarle Charlottesville Historical Society, who stated that the city's Civil War statues are an important reminder of the area's history and should not be removed.[20] Szakos said that as a result of her comments she was the subject of hostility but felt that the situation still warranted community conversation.[21]