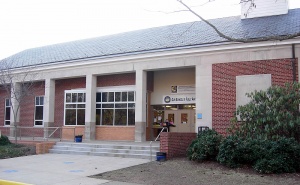 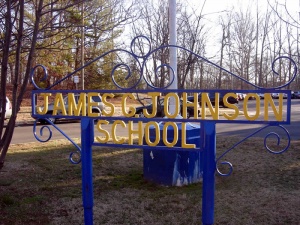 The Johnson Elementary School motto is “We are family.” Small class sizes and a steady focus on achievement create a climate for academic excellence. Johnson earned the 2009 Governor‘s Award for Educational Excellence, the highest honor in the Virginia Index of Performance program.

Johnson Elementary is located in the southwest section of the city on approximately 13 acres of wooded land. Built in 1954, the school was named for Dr. James G. Johnson, who was Superintendent of Schools for 36 years. [1]

In 1993, the school was renovated extensively and an enlarged library, new floors, and office space was added.[2]

The school was desegregated in 1962 following a lawsuit from the NAACP Albemarle-Charlottesville Branch. [3] 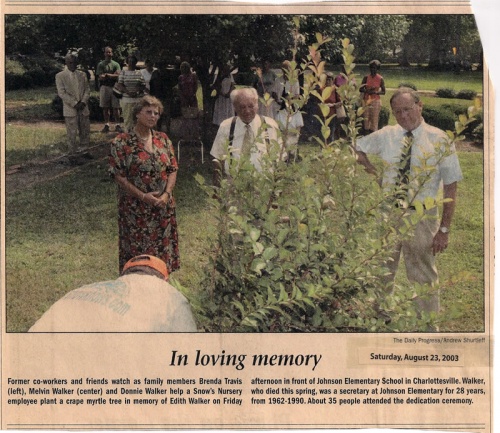 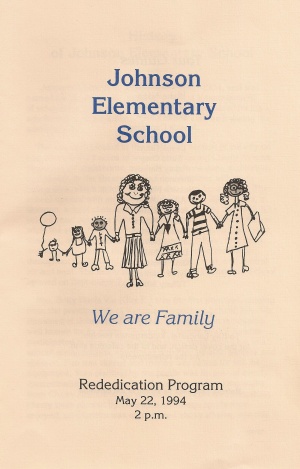 "Johnson Elementary School was built in 1954 and was named for Dr. James G. Johnson who was superintendent of schools for 36 years. He especially is remembered for his scholarship and the seven schools which were built during his administration.

The school is located in the southwest section of the city on approximately 13 acres of wooded land facing Cherry Avenue. There are 27 classrooms, a cafeteria, gymnasium, auditorium and library. In the library is a beautiful fireplace with story-telling tiles, which quickly became the story-hour center. The school opened with an average of 550 pupils, 28 teachers, a librarian, school clerk and cafeteria force. During the 1992-­‐93 school year, Johnson School operated out of Jefferson Annex while the school was renovated. The renovation included new windows, an enlarged library, carpeted gym floor, new seat and stage curtains in the auditorium, patterned tile floors throughout the building, a rearranged office area, and central air and heat. The newly renovated Johnson Elementary School opened on September 7, 1993.

Mrs. Betty Davis Via (Guy F.) was the first principal, coming from the principalship of Venable Elementary School. Mrs. Via remained at Johnson School for 10 years. The school soon became well known for its motto, “School is a family affair.” Parents participated in all activities, which culminated each year in a school spring festival, which was attended by both parents and children. Fun was shared and money was raised for school equipment. Tree planting by the pupils was an annual event, concentrating on dogwoods and evergreens. The long walks from Cherry Avenue to the school were lined with blossoming cherry trees planted by the pupils. Although sports were enjoyed, scholarship was emphasized above all else, and this has paid off not only in fine high school records, but in college and professional achievements.

Mr. James Yankovich became the school’s second principal in 1964 and served for one year, to be followed in 1965 by Mr. T. Alfred Parker. Mr. Parker served a three-­‐year tour as principal. During his tenure, Johnson School changed from serving children in grades 1 through 7 to Kindergarten through grade 5. The school continued to be a leader in academic accomplishment and projected the image of being a neighborhood school. Children utilized the library and the wealth of supplementary books to their advantage so they enjoyed their school days.

Dr. Everett B. Howerton became Johnson’s fourth principal in 1968. He was followed in 1970 by Mr. Julian King, who served as principal for 16 years. He and Johnson School were synonymous. He worked to instill within each child a sense of school pride and belief that “we come to school to learn.” After Julian King, Mr. David Garrett served as principal from 1986 to 1990. During Mr. Garrett’s tenure, Johnson School’s organizational structure changed from a K-5 school to a pre-school through grade 4 school. Mr. James Henderson currently is the principal. [1994].

The enrollment has fluctuated from a high of 828 when the building was shared with Jackson-Via Elementary School children in 1969 to the present figure of 350 [1994]. The program for four-­year-­old children, redistricting, integration, team teaching, parallel scheduling, computer technology, resource teachers and federal funding have all been a part of the progress at Johnson School. The school continues to be an academic leader, continues to involve its parents, and perpetuates the neighborhood school concept.

The beautiful surrounding of dogwoods and children using the grounds during the summer months are positive reminders of the insight of Johnson’s first principal, Mrs. Via: Children still “live” here and enjoy their experiences." 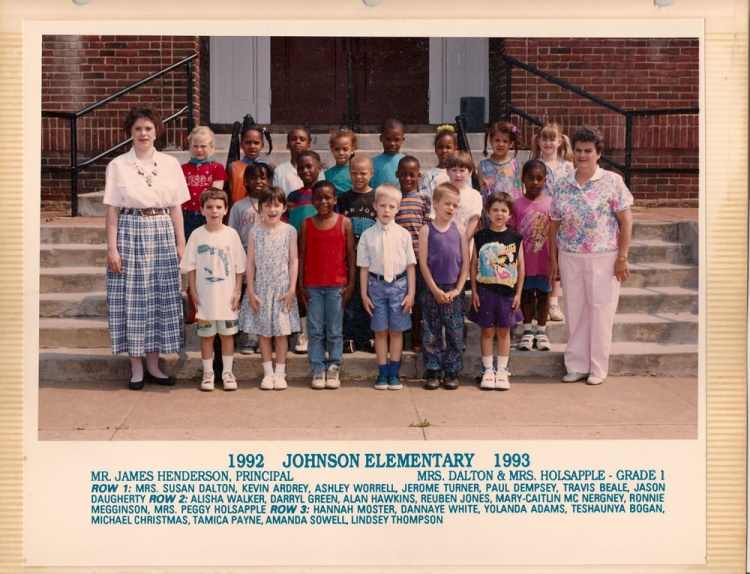 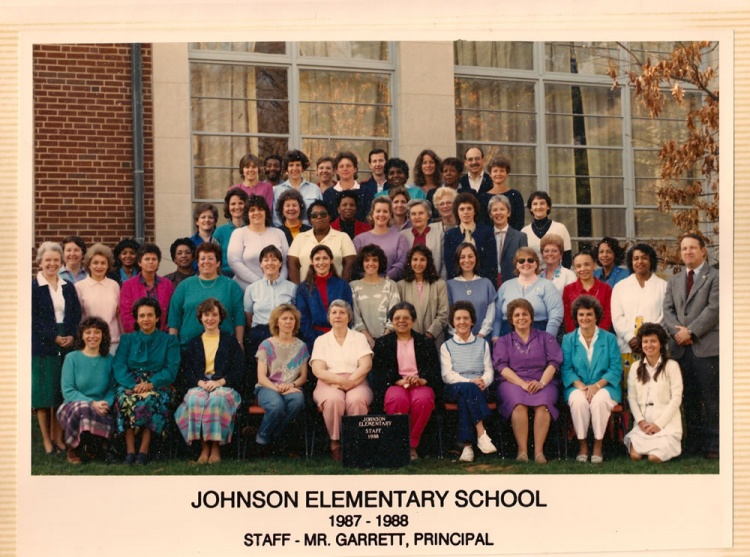 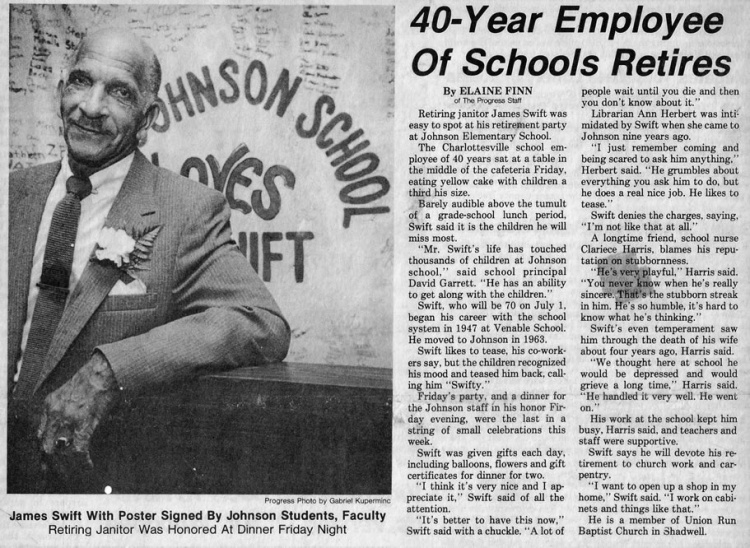 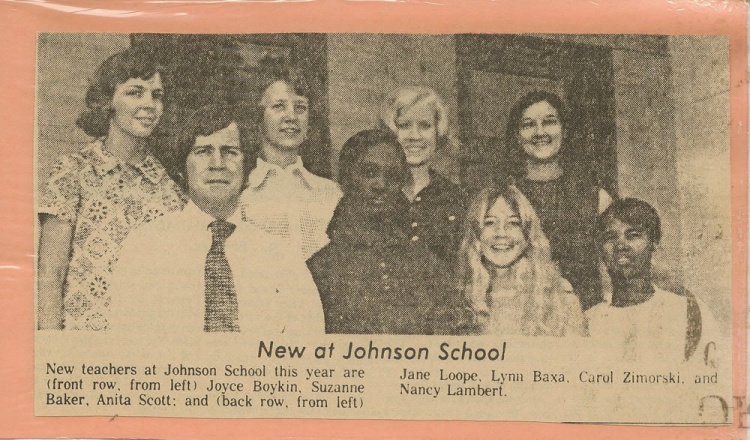