John West (c. 1849 or c. 1850 – July 25, 1927) was a prominent businessman and civic leader. He was born a slave in Charlottesville and freed at the end of the civil war. West Street and the Westhaven community are named in honor of John West. 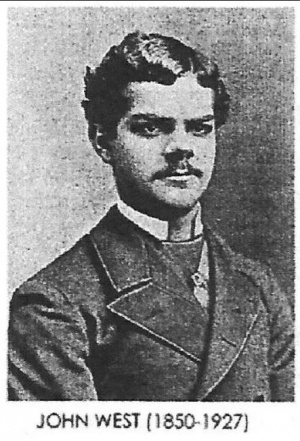 John West and his mother, Isabella, probably were owned by Jane West, a milliner who was a free woman of color residing in downtown Charlottesville.[1]Isabella may have been hired out to Professor William Barton Rogers at the University of Virginia when John was a toddler.[2] Professor Francis Smith, Rogers’ successor, later purchased her. Isabella and her children by her husband William Gibbons (also enslaved by a University Professor) were listed with Smith in the 1860 slave census, but John stayed with and was reared by Jane West, at that time a childless widow for more than fifteen years.[3]

Jane Isaacs West was one of the seven children of Nancy West, a free woman of color, and David Isaacs, a local Jewish merchant. Jane married her cousin Nathaniel H. West in 1832.[4] Nathaniel died in 1834.[5] By the early 1850s Jane West’s mother and three of her siblings had moved away to Ohio, her father and one brother had died and two brothers lived elsewhere. Only Jane remained in Charlottesville where she owned property and operated her business as a milliner. John undoubtedly eased her loneliness.

There are several versions of a story that near the end of the Civil War when Sheridan and Custer came through Charlottesville, John West warned Col. John Mosby of the approaching Yankees. In one version West held Mosby’s horse while he went into the barbershop for a shave. Hearing that the “Yankees” were approaching he warned Mosby who ran from the shop with lather on his face, tossed John a silver dollar, mounted his horse, galloped away, jumped a barricade and fled down Park Street. In a second version John West told his own story. Two men (Col. Mosby and a Captain) asked him to hold the reins of their horses while they were in the shop of F.D. Brockman, a merchant tailor. A man ran down the street looking for Mosby to warn him about the approaching Yankees. John West ran into the shop calling out the alarm. Mosby tossed him a silver dollar. They mounted their horses and galloped away. John ran along and saw them “clear High Street at one jump with mud flying to heaven” and escape down Park Street. When Mosby visited 40 years later West showed him the identical dollar.[6]

Due to Union measures such as the Confiscation Acts and Emancipation Proclamation in 1863, the war effectively ended slavery, even before ratification of the Thirteenth Amendment, which in December 1865 formally ended the legal institution throughout the country.

Once freedom came John attended the Freedman’s school, later known as the Jefferson School, where his mother was the first woman of color to teach.[7] He also trained as a barber serving white clients. In her will written 1867 and in court 1869 Jane West left all her property to John W. West, her adopted son. No legal document has been found to confirm his adoption. A codicil to her will stipulates that he would inherit her property at the age of 21.[8]

In the 1870 census John West appears twice -- with his mother Isabella and her family on the south side of West Main Street and with James Scott, musician, on Main Street.[9] John West, 22, married Darrie Dawson, 19, on October 12, 1871. Darrie was the daughter of Martha Barnett and James E. Dawson, and the niece of Septimia Barnett.[10] The court in 1862 had declared the prosperous Barnett sisters “not a negro.”[11] Septimia Barnett was especially fond of John and wore a large gold locket with his picture in it.[12]

Using inherited assets and his earnings as a barber, John West purchased his first property in 1872. West purchased hundreds of acres of land during his lifetime.[13] As the first to buy costly land he is called the first of the “four hundred” a phrase used to identify wealthy African Americans in Charlottesville. Much of this land is within the 10th & Page neighborhood. [14]

In May 1881, West was elected to the Town Council. On July 1, 1881, the Council of the Town of Charlottesville composed of the elected Mayor (B. R. Pace) and six (6) Aldermen (C. D. Fishburne, president; C. H. Harman, W. C. Payne, M. Trieber, A. B. Heller and John West) held an organizational meeting. The Chesapeake & Ohio Railway Directory, Containing an Illustrated History and Description of the Roads, 1881-1882. Charlottesville was incorporated as a city in 1888.

Between 1872 and 1924 John West purchased 54 properties in Albemarle County and 41 in the City of Charlottesville. He often purchased land at commissioner’s sales. Much of the land he resold, but some was rented out. Among the Charlottesville locations where he owned land are Vinegar Hill, Fifeville, the 10th street area, and on Preston Avenue where the Monticello Dairy and Zion Union Baptist Church were later built. In Albemarle he owned land in the Buck Island area of southeastern Albemarle and land near Stony Point that included mineral rights. His largest purchase was 903 ½ acres, largely in Augusta County, that is now part of the Shenandoah National Park near where route 250 and Interstate 64 cross the Blue Ridge Mountains.

John West and Darrie raised their children in the house formerly owned by his wife’s family on West Main Street at the top of Vinegar Hill. By 1900 they had had fourteen children of whom seven survived at that time.[16] John and Darrie’s four daughters all graduated from college. Septimia West taught in the Jefferson School prior to her marriage.

A granddaughter recalled a visit with John West in the early 1920s. He was a great gardener and the steep-sloped yard behind the West Main Street home received lots of sun for growing wonderful tomatoes. His grandchildren were allowed to harvest and sell them to George Inge at his grocery store on the corner of West Main and 4th street. One day during their visit, John West hurried all the grandchildren safely into the house. He stayed out on the front porch as masked and robed Ku Klux Klan members paraded down West Main Street. Once the Klan had passed he came indoors and announced that as their barber he could identify them all by their shoes![17]

On July 25, 1927, John West died in his home at 313 West Main Street.[18] He died a very wealthy man, leaving eight heirs: his son Harry; daughters Septimia, Alice Cook of Washington D. C., Rosalind and Dorothy; and grandchildren Lawrence, Mabel and John.[19] His estate papers are at the University of Virginia Law Library.[20] John West was buried on August 1, 1927 in Oakwood Cemetery, J.F. Bell Funeral Home[21], along with his wife, not far from where his mother Isabella probably lies in an unmarked grave in the Gibbons family plot.

West Street and the Westhaven community are named in honor of John West. Several of his children attended the dedication of Westhaven on Sunday Dec. 13, 1964 at two p.m.[22] His descendants live across the country and around the globe.